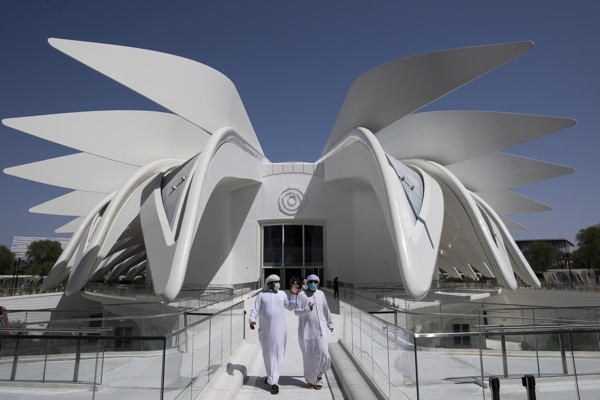 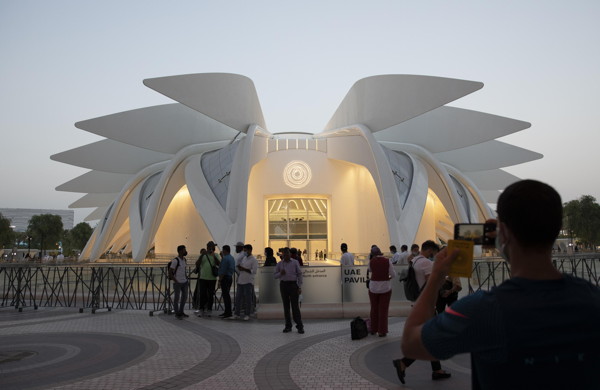 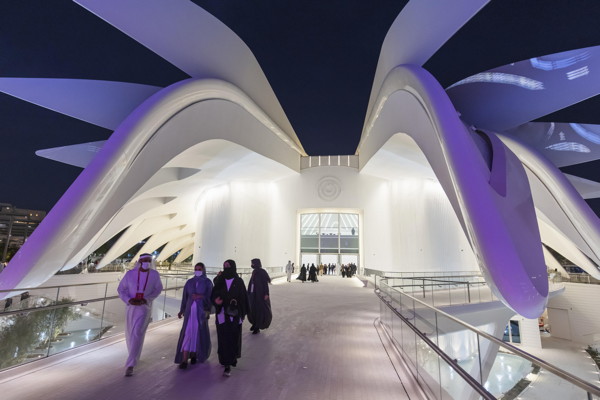 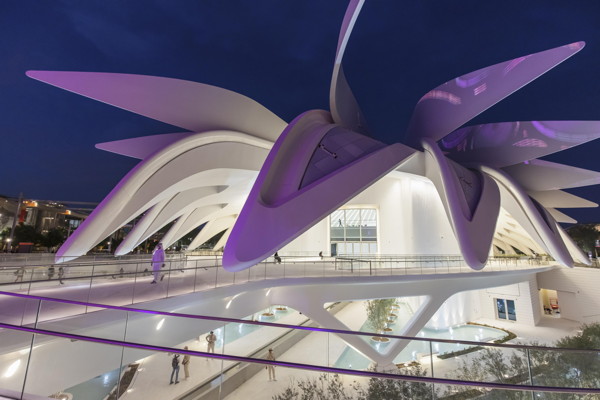 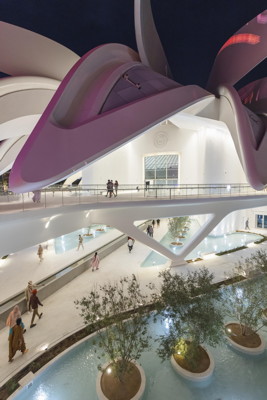 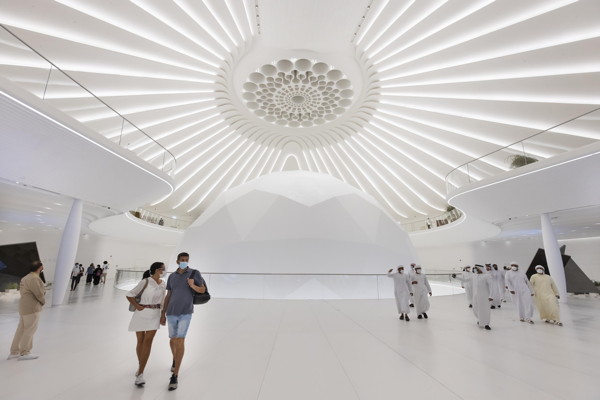 Located in the heart of the Dubai World Expo site, the pavilion of the host country, the United Arab Emirates (UAE), features one of the most striking designs of the Expo.

The design of the UAE pavilion is reminiscent of a falcon in flight.

The four-storey structure is covered with 28 carbon fibre wings that can open fully in about three minutes to reveal integrated solar panels. When not in use, the panels remain protected from the elements, including the region's powerful sandstorms.

The wings can be positioned between 110 and 125 degrees, to better absorb sunlight, and the electricity they produce is sent to the main power grid.

Because of their size and weight, the wings open using the energy of three hydraulic cylinders, which must be precisely synchronised to avoid irregular movements that could crack the wing structure itself. Calatrava explains that this aspect of the roof's engineering required special attention.

With a total area of 15,000 square metres and a height of 27.8 metres, it is the largest of all the national pavilions at the Expo, and is surrounded on all sides by landscaped areas with plants. The building itself is shaped like a traditional Bedouin tent, centred around a spherical auditorium with a large skylight.

To create a cool, tranquil environment to offer visitors a respite from the sun, Calatrava incorporated large water basins and trees that naturally cool the air, create shade and reduce reflected heat, making the space an immersed refuge from direct exposure to extreme weather conditions.

These landscaped areas consist of thousands of plants of 12 different species, eight of which are native, as well as over 80 trees.

A multifaceted, spherical auditorium in the centre serves as both a centrepiece and a functional space with a capacity of 200 people.

The space presents a symbolic interpretation of the flow of movement through the articulation of carefully planned lines and worked spaces.

Inside, visitors can discover six interactive installations, each illustrating a chapter of the nation's history. One of these, called Crossroads, is based around 700 physical objects historically traded in the Middle East, such as "mangoes and spinning tops, coffee beans and compasses, perfume bottles and pearls", and aims to highlight the UAE's geographical position as a crossroads of historic trade routes dating back thousands of years.

The story of the UAE is told in the host country pavilion at Expo 2020 Dubai.

An immersive multi-sensory experience entitled 'The Land of Dreamers Who Make' guides visitors through the authentic stories of the nation and its people - Emiratis and expatriates - with the aim of fostering a sense of belonging, encouraging global and local stakeholders to collaborate with the UAE and inviting the world to experience the UAE.

Like several other pavilions, this one will be repurposed for cultural use after the event ends in March 2022 and has been awarded LEED Platinum certification, the highest ranking in the world's most widely used green building rating system.