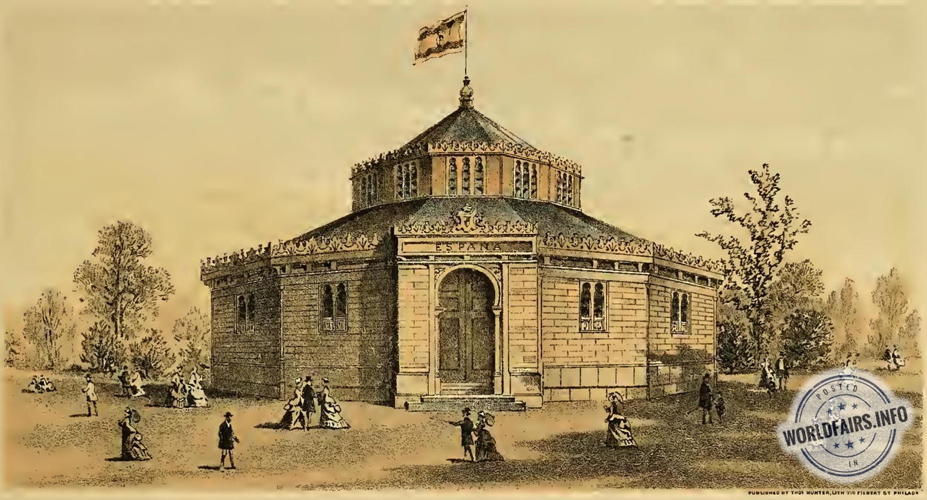 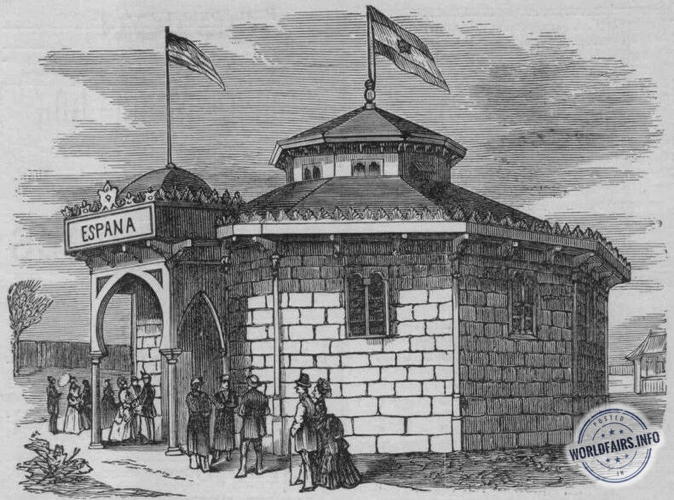 Spain prepared for the use of her commissioners and servants an octagonal building somewhat in the style of the lanterns, with but little decoration, and no character to attract special attention.

The hasty visitor to the grounds might pass it by unpretentiously as much as many who are near; but nothing more than a little attention will be needed to the structure to discover that it is a very neat architectural example.

The Moorish door may be called plain, but it is strictly subordinate to the rules that govern in this fantastic style, lacking only in the elaboration of ornaments that appear in the Alhambra and other ancient remains that attest to Moorish rule in Spain.

The windows are Moorish. The decorations appropriate to the eaves of the first floor are made of zinc, according to the designs of Mueller, who also prepared the coat of arms that surmounts the door.

The upper lantern is illuminated on all sides and the finish is in harmony with the general style. The Spanish flag flies over everything. This structure is occupied by a detachment of Spanish engineer soldiers, consisting of a lieutenant, a sergeant, a corporal and twenty soldiers.

The interior fittings are those of a barracks and the pavilion is subject to strict military discipline. After the original structure was completed, an arcade was built next to the main building, in the Moorish style; it is small, but much more conspicuous in detail than the main headquarters. This building is used for a dining room, offices and shower rooms.

Later still, a large structure was erected next to it, for the use of the commission. It is a parallelogram, high, airy and well-lit. It will not be comparable in richness of style to the octagon or the arcade; but it is a sensible, substantial affair, and is in a position where a pleasant view of the grounds and coolness - the situation being most inviting to the breeze - are always objects to be attained.

The Commissioners have their official residence in this additional building, which is equipped with all the conveniences for the discharge of their duties in a manner satisfactory to the Spaniards as well as to the Americans who await them.

The octagon measures 50 feet in diameter and the largest structure 80x100 feet. The Spanish buildings are on Republic Avenue, adjoining the West Virginia buildings to the west.