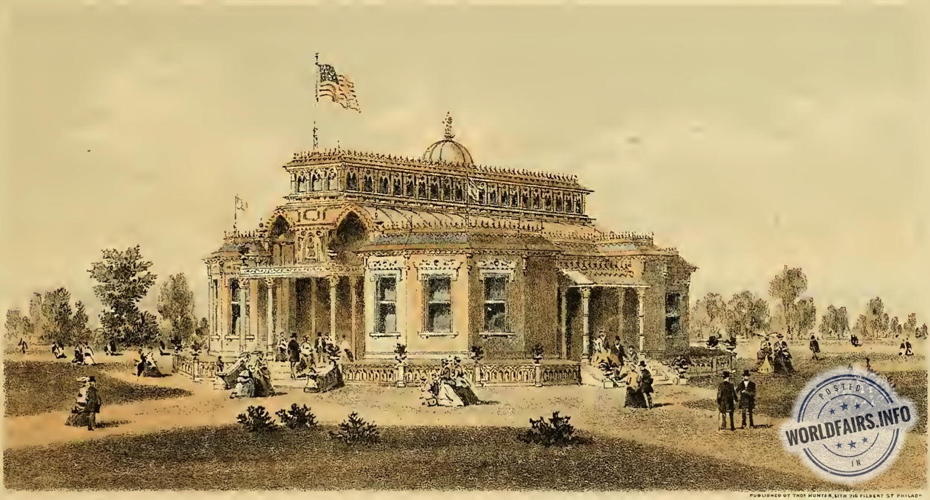 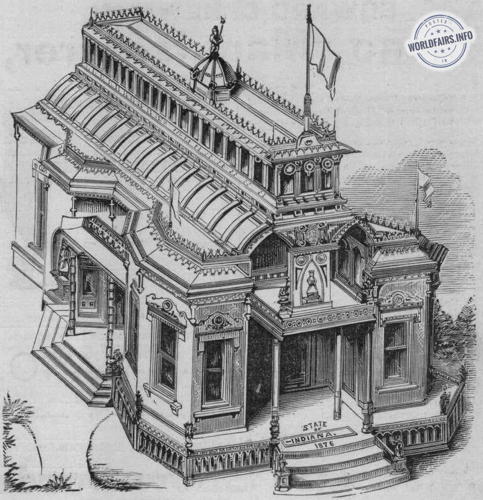 This pavilion is located on State Avenue, west of the Ohio Building.

It is somewhat peculiar in appearance and decoration, and by some has been compared to the upper and "Texas" decks of a Mississippi steamer.

It is constructed of wood and is in the form of an irregular cross, 55 feet long. From the ceiling level of the side rooms, a lattice roof rises 24 feet above the centre of the room, which is lit from the rotunda above.

There are three entrance porches - one in the centre and the others on the sides. Inside, on the walls, are 200 tablets, 92 of which are to be used by the counties of the state for their statistics. By this means is furnished in the most concise form a very complete and satisfactory summary of the State of Indiana in all the details which are of interest and importance to the political economist.

Each county shows the date of its establishment, the time of its organization as a county, the census figures of population, statements of principal products, particularization of industries, geological and natural features, as well as the population of the larger villages and a count of churches and schools.

The towns, by this assistance, exhibit their commercial statistics and manifest to all who observe the character of their most notable industries. The design should include on these tablets matters of knowledge and interest equal in value to the most elaborate article that could be printed in an encyclopedia. The remaining tablets are to be devoted to the businessmen of the state, for advertising and other purposes.

There are also committee rooms, a women's salon, a men's salon and other flats.

A beautiful fountain stands in the centre of the great hall. The materials used in this striking building are wood, brick, iron and glass. It was semi-officially stated at the time of the structure's installation that it was intended to illustrate "as much as possible of Indiana's homes and their productions". The materials are as the State produces them, but the most enthusiastic citizen will not be prepared to go so far as to assert that "Indiana houses" are generally as ornate as this very fine building.