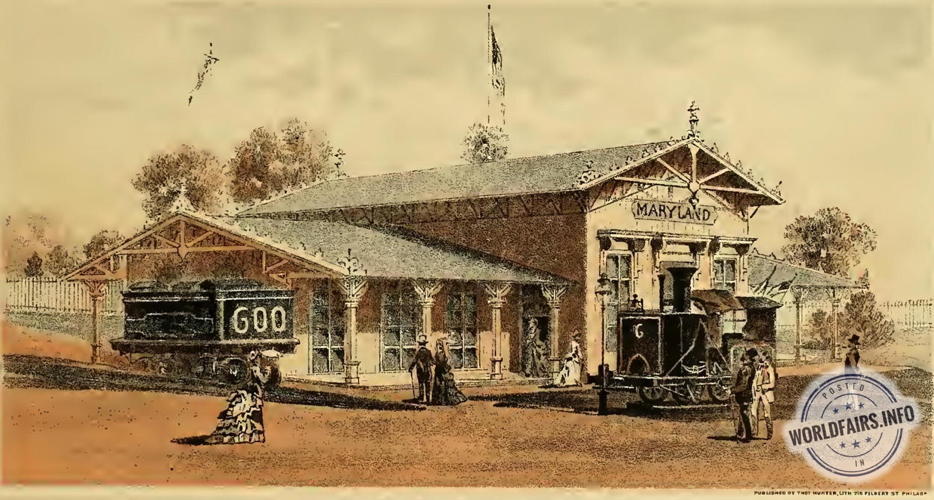 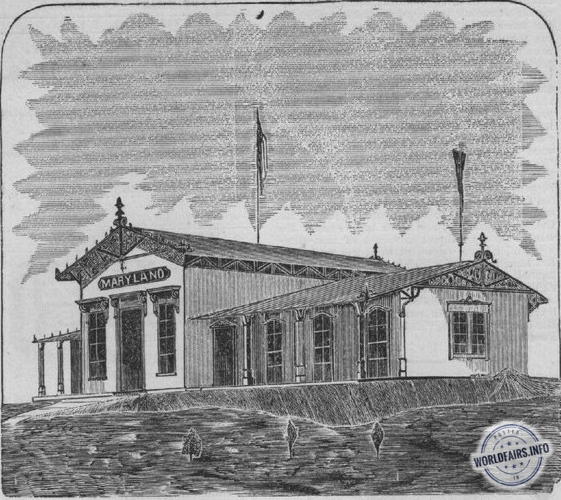 West of its territorial neighbour, the Delaware, on State Avenue, MaryLand maintains its headquarters, immediately north of the California building. The Tennessee is to its right; and being close under the rise of George's Hill, the position is high enough to overlook the grounds.

The style of this house is not so ornamental as some of the State seats in the vicinity.

The Maryland appropriation was very moderate and construction did not begin until near the opening of the exposition. The floor plan is that of a cruciform structure. The centre is 31.5 feet wide by 60 feet long. The wings to the east and west are each 30x31.5 feet. At the corners of the cross are piazzas, each 12x30 feet, usable for shade, making the interior flats more pleasant and taking away from the exact appearance presented by the bare cruciform figure. The building is two storeys high, the cornices wide and overhanging, decorated with ornamental work in scrolls, interlacing, geometric figures and shields bearing the state monogram and the dates 1776-1876.

The central pediment bears the word "Maryland" in large letters.

Turned and carved finials finish the exterior. The interior is devoted to exhibition purposes as well as accommodation. The central hall displays in appropriate exhibits the mineral, mining and other productions of the State of Maryland, including coal, stone and marble, and also illustrates hunting and fishing interests, including in the latter the oyster fishery, which is of great importance.
There are models of fish hatching houses, fishing rafts and buildings used in the Susquehanna shad fisheries, as well as oyster catching equipment, vessels, pungys, canoes, dredges, rafts, etc.

A very important part of this exhibit is devoted to showing the various enemies of the oyster that prey on its existence - all except man, the greatest enemy of all, who calmly stalks and is glad that he comes last.

The Maryland Academy of Sciences provides liberal selections from its museum. The Maryland Historical Society has loaned valuable antique relics, especially portraits of historical state dignitaries from Calvert to the present.

To the left of the main hall are the press rooms, intended for the headquarters of newspapers for correspondents, etc., as well as parlors and rest rooms and other conveniences, making this house agreeable as a stopping place for the citizens of the State, and presenting to all who may lay eyes upon it something of interest and instruction.