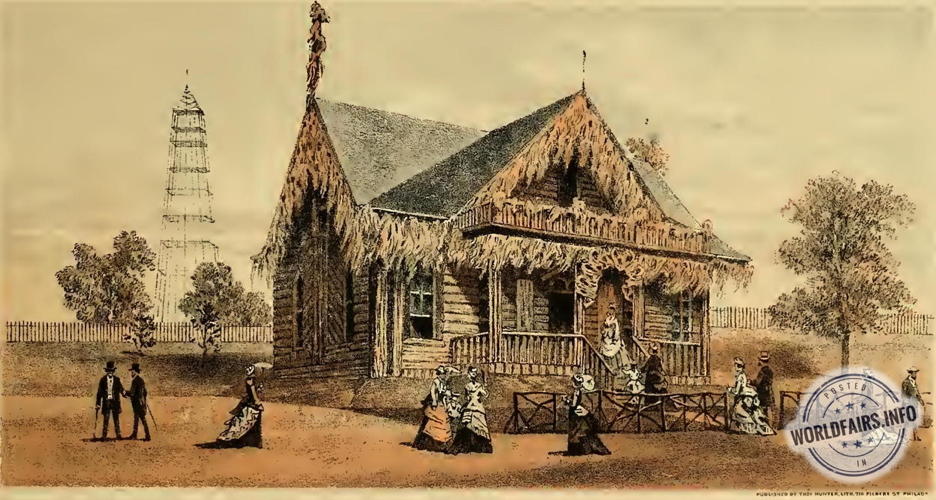 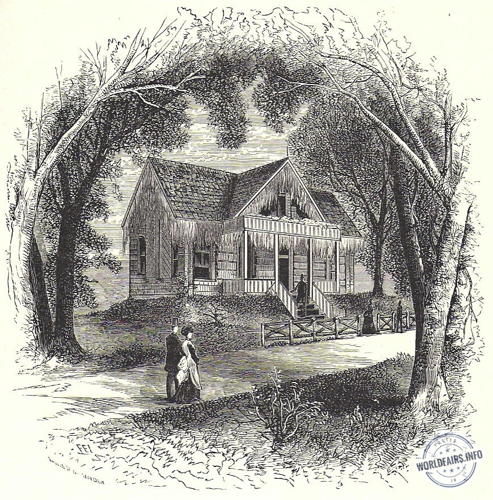 Rougher in outward appearance, more comfortable in interior design and furnishings, the Mississippi State Building calls attention to itself by the contrast it presents with the gay and fanciful structures that surround it.

While the arts of the carpenter, the cabinetmaker and even the upholsterer have been brought to bear in beautifying the mansions in which most states entertain their citizens,
Mississippi presents no more of the builder's art than is required by the emigrant who pitches on a homestead in the shadow of the woods, and whose residence is a mere log cabin which he, though untutored in architectural mysteries, can make.

The State receives its visitors in a crude shelter which suggests the earliest style of house known to its settlers. Its accommodations are contained within a space of 40x30 feet. The location is in the northwestern part of the Centennial compound, west of the Japanese building.

The exterior walls are mainly of hickory logs split with bark. The door and window frames are made of different grades of pine. The door affects as much as possible the Gothic style, by the meeting in the centre of two logs rising at a small pitch. The panels of the door are intended to show the great variety of character of the native woods of Mississippi, these parts of the structure being made of 48 different varieties.

The eaves overhang the walls and porticoes, and are lined with a long Spanish moss, which forms so constant a pendant from the great trees which line the banks of the Mississippi. This substance is arranged in a picturesque style and adds much to the rural character of the building.

The balcony is supported by pillars made from tree branches, rustic and shaped as nature allowed, while the capitals are knotted and the grotesque knots and roots are fantastic in their arrangement. The interior is furnished with native woods; on the inner walls, smooth and polished, to show the natural grain and colour. Pine predominates, but there is great contrast even in this product, which varies in appearance and quality according to the species and parts of the trees from which they are taken, not only in grain and shading, but in substantial colour.

There are 68 kinds of wood in the interior, distinct from those of the door panels, so that the wood treasures of the State are here presented in 116 varieties.

The interior ornaments, brackets and other accessories are as the forests provide them and add to the overall interest of the structure. All the wood used in this house came from Mississippi. Carpenters, citizens of the Commonwealth, came with her and erected this unique and picturesque cabin. The Mississippi Commissioners are housed here. Residents of the state are welcome and strangers from all parts of the United States and the world are courteously welcomed and given the opportunity to see and examine for themselves.