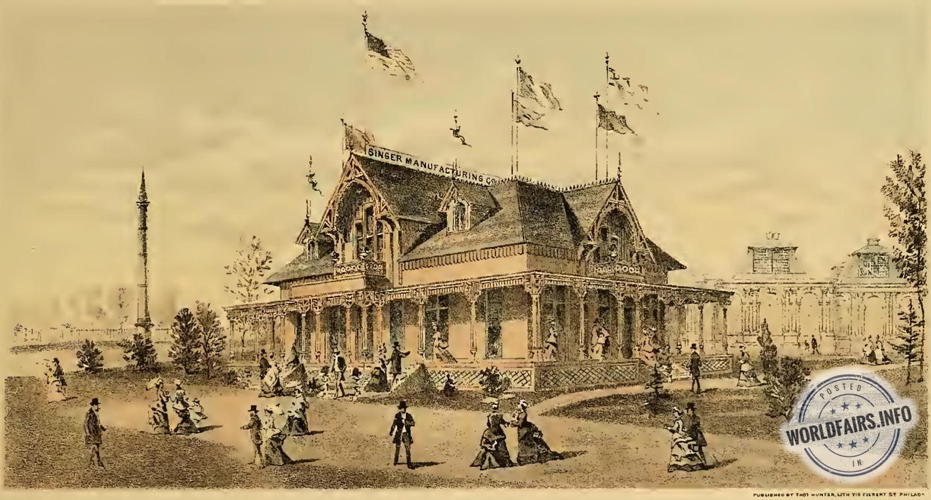 Time is entirely in the memory of Americans of the present generation who will not confess when the invention of the sewing machine has been spoken of as a novelty which could never be valued, or which, if it were, would lead to deplorable results in the distress and injury of every seamstress in the country.

It is scarcely thirty years since Elias Howe obtained his first patent. Some years passed before the machine gained much favour, but of late its success in various forms has been enormous. The Singer Manufacturing Co. has invested a great deal of capital in the manufacture of machines on the patents in their possession, and they have their headquarters in the Centennial compound. The two millionth machine of their manufacture will, at the end of the exhibition, be awarded by lottery to a lucky woman who may visit them in the meantime.

The Singer Building is situated on Lansdowne Drive, north-west of the Arts Building Annexe, and occupies a pleasant position overlooking Lansdowne Glen. It is in the Gothic cottage style, oblong in shape, the dimensions being 56x81 feet. Very ornate gables rise in the centre of the north, south, east and west sides. They are surmounted by beautiful finials, and the woodwork and open decoration are of refined style. Their sloping roofs join the Mansard pavilion roofs at the corners of the house. Each of these corner additions receives light from a single dormer window opening onto the second floor bedrooms.

A beautiful portico surrounds the building. It is wide, comfortable and shaded.

The slate roof is cheerfully decorated with colours.

The upper part of the chalet is decorated with flagpoles at every available point. There are twelve of them, displaying the colours of the major nations of the world.

The ladies' lounge is situated in the south-western part of the cottage and is richly furnished, the wall decorations being elegant tapestry pictures worked by the Singer sewing machine. There are adjoining offices. The main showroom is to the east and occupies the whole depth of the building on this side.

On display are specimens of the manufacture of sewing machines on footwear, saddles, harness, clothing and embroidery.
There are 61 sewing machines in full operation in this flat during the exhibition hours, no two of which are alike in the details of the machines. Among the curious devices on display are machines for sewing wax thread, making buttonholes and eyelets, and binding books. Three wax figures of beautiful women, one of which is an accurate representation of the Princess of Wales, are in the windows. The dresses are elaborate and expensive, in the richest styles, showing varieties of stitching, pleating, ruffling and embroidery, including a magnificent suit rich in gold bullion embroidery, this garment is valued at $8,000.

The architect of this building was James Vandyke, of Elizabeth, New Jersey.
The work was done entirely by employees of Singer Manufacturing Co.