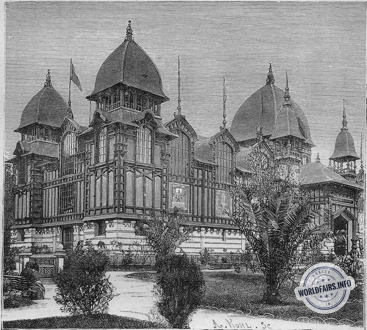 Built to the plans of M. Sauvestre, architect of the Eiffel Tower, the Central Palace is 73 metres long. On the ground floor, it contains three large exhibition rooms. On the first floor, elegant galleries, which go around the Palace, overhang these three rooms. From up there, you can see an exhibition area of almost two thousand square metres and travel by leaning against the balustrades. The view is delightful.

In itself, the building is worth admiring. Mr. Sauvestre wanted to make his creative dreams come true and not copy this or that colonial style.

Intended to house the products of the colonies without any marked indigenous art, as well as those of the rich colonies with a special aesthetic, his Central Palace had to be above all original.

The building has this originality, while at the same time keeping away from the Asianism so purely summarised in its two neighbours on the right and left: the Cochin-Chinese and Tonkinese palaces, and from the banality of Western bazaars built for ephemeral exhibitions.

Its dome, which reaches a reasonable height of 50 metres, and the elegant profile of its roof, with two-tone glazed tiles, are remarkable. The red of the exterior decoration reminded us of Japan, of the lacquered wood of the temples of Kioto and Nickho; only, it is weakened enough, Europeanized enough not to shock under our pale sun, while evoking the luminous Orient.
Inside the Palace are gathered the shipments of all the colonies which do not have a special pavilion; they are, naturally, the most numerous. Some of them, however, even though they have a building reserved for their shipments, have contributed to the decoration of the central Palace. Thus, under the vault, in the central room, one must admire, on entering, a pyramid of Buddhas of an astonishing effect under a bouquet of gigantic bamboo and palms. They are there, all of them, as they have been modelled and painted for so many centuries by the artists of Far Asia. Their monstrous group symbolises the faith of twenty peoples, the religion which has the greatest number of believers on earth.

So, without mentioning the singular beauty of such a decoration, we must be grateful to the organisers for having preceded this hieratic group, this philosophical preface, with the wonders they are showing to our visitors.

Around the pyramid, exoticism is spread out, a feast for the eyes and a torment for the collector. Under circular showcases, in ingenious trophies, and always arranged with exquisite taste, are weapons, lacquers, mother-of-pearl inlaid wood, clothing, furniture. To describe them? It would take twenty guides, and the pen of a Théophile Gautier.

At the back of this central hall, behind the Bouddahs, let us at least point out the Annamite pediment of the door leading to the offices of the commissioners of the Colonial Exhibition. With its gilding in relief, its Indo-Chinese hangings, this simple frame is not the least suggestive piece of the symphony: an invitation to travel that everything sings here, from floor to ceiling.

The bays dividing the three halls on the ground floor of the Palace correspond to each of the exhibiting colonies; the galleries on the first floor, which we have mentioned, comprise, symmetrically and in parallel, the same division, their perimeter increasing the general exhibition area by a third.

On entering, and after admiring the Buddhas, let us turn RIGHT? This is French India, what remains of our colonial domain at the beginning of the last century, the shipment to the Metropole of some 49,622 hectares remaining to France: Pondicherry, Chandernagor, Mahé, Karikal, etc. The Guide here has no interest. The shop windows speak for themselves. Then, - and always in the same direction, it is Taïti, the French islands of the Pacific, New Caledonia, then the dependencies of Madagascar: Mayotte, Nossi-Bé, etc., and finally the opulent shipments from Reunion Island, the jewel in the lost crown.

A monumental door - a pure jewel - before we return to the central hall, reminds us of India again. It is a shipment not of a colony but of individual exhibitors.

The gallery overhanging the right-hand hall, from which we are leaving, contains, as we said, the shipments of the same colonies whose products decorate this part of the ground floor.

Back in front of the pyramid, let's enter the LEFT hall (coming from the door leading to the central aisle).

Here, on the right, are the exhibitions of Saint-Pierre and Miquelon, French Guiana, the West Indies (Martinique, as Guadeloupe has a special pavilion that we will find later), Senegal, Gabon, etc.

Here again, the visitor will close his Guide to look. Flora and fauna, industry and agriculture, the showcases, the rich trophies, the panoplies sum up the total production of these colonies.

In the gallery on the first floor, and on the same side, he will find the samples that his curiosity did not discover on the ground floor.

But, in addition, on this first floor, in the centre of the Palace, he will visit a room of ethnography which will summarize for him the lessons of his hasty walk. There, arranged according to a more rigorous, truly scientific classification, he will see the weapons, the fabrics, the manifestations of art, that is to say the significant physiognomy of the races and regions whose commercial character he will already have been able to study briefly.

In the same room, a large panel deserves a stop: it is the map of Tonkin, sent by General Bégin (of the marine infantry).

The circular gallery is not lacking in maps and paintings. It differs from the ground floor, whose divisions it follows, especially in this special aspect, and some of its paintings say more than large books about colonial landscapes and life overseas.