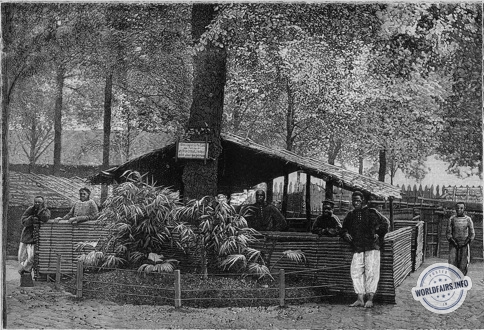 Gabon-Congo was perhaps the most popular of the French colonies at the beginning. The men who created it and who, four years ago, gave it its present extent, are among those, very rare today, whom all France, without distinction of party, has adopted; Brazza, Ballay, these are names which one is happy to be able to oppose to that of Stanley.

On the other hand, it can be said that until last May the colony itself was almost completely ignored. The number of people who had any idea of its appearance, its inhabitants and its products was very small. The books and pictures that should popularise it were still rare and not widely available; few people went there, apart from the personnel needed to run it. Everyone knew Brazza; the most vague ideas reigned over his work - More than any other, in this admirable Esplanade des Invalides, the Gabon-Congo exhibition is therefore a revelation. The unknown colony is presented from scratch, so to speak, with two villages, twenty inhabitants, live or stuffed animals "and a great variety of objects.

Coming from the main entrance to the Esplanade, the first thing you see is a Loango village. Loango is the southern part of the coastline of our colony; it extends to the vicinity of the mouth of the Congo. The houses in this village are built entirely of papyrus stems and the wood of a palm tree called raffia, which is improperly called bamboo. The walls are made of papyrus, placed vertically, on which, at equal intervals, horizontal strips of raffia branches stand out. The roof, covered with leaves, forms a fairly wide and high canopy on the front and lower galleries on both sides.

The second village is Pahouin. The Pahouins live on the right bank of the Ogoôué. As they are often at war with each other, their villages are mostly fortified. Such is the one we are shown at the Invalides. It is surrounded by a palisade and forms a rectangle, on two sides of which are fairly low huts, joined in continuous rows, and made only of raffia branches, which are all vertical, unlike the village of Loango. The side of the palisade where two openings have been made for the public should also be occupied by the huts; the only entrance to the village, if we were shown it as it really exists, should be the long corridor on the side of Avenue La Bourdonnais. This corridor, which is made up of two parts that intersect at right angles, would only offer the attackers a very difficult access, especially as holes, pierced as loopholes in the palisade, would allow it to be riddled with rifle shots.

The centre of the village is occupied by a large shed, the roof of which is supported by piles that a barrier joins up to halfway up. This is the public square, the place where the inhabitants, leaving their smoky huts, come to talk, work, and often sleep in the shade. Besides the natives, there are two or three monkeys, and long-eared local dogs that look like foxes.

The Pahouin village is not inhabited by Pahouins. The natural people brought from Gabon are Adoumas and Okandas. At first sight, one will not perceive much difference between these two races, and all these negroes will seem to belong to the same type. On closer examination, however, they will be distinguished. The Okandas are taller and more vigorous; their noses are less crushed, their jaws less prominent; some have a light beard. In short, they are further from the traditional type of Negro. The Adoumas are small and beardless, rather thin; even their young men have an old-fashioned look. It is, moreover, rather difficult, for a European, to classify Negroes, at first sight, according to their age. The absence of a beard, and these black faces, on which wrinkles are difficult to see, prevent him from doing so.

Okandas and Adoumas live on the banks of the Ogoôué; skilful pirogues, they have rendered appreciable services to the explorers of Gabon, and it is from among them that the personnel of the transports are largely recruited. One can see, in front of the Palais des colonies, one of these long pirogues, with a flat bottom, in which they transport goods on this river. The flat bottom gives these boats greater stability when crossing the rapids. As for the small pirogues, which can be seen in the village and elsewhere, they are especially intended for fishing.

Okandas and Adoumas seem like friendly people. They always have a smile on their faces. Their lively and good-natured air makes them contrast with the Senegalese, who are always very serious, and especially with their Canaque neighbours, who are a bit sullen and answer with a rather reluctant air to the questions we ask them. These brave Gabonese, on the other hand, are very eager to meet visitors, and if their French is a little elementary, their vigorous handshakes and their good laughter at least show a great deal of cordiality.

Near the village is a chalet where perfume bottles are sold, made, it seems, with oils from Gabon. On the other side is a pavilion, of rather coquettish architecture, with side galleries, and white and blue poles supporting a bamboo roof. In one corner is a refreshment counter, where the various brandies and liquors, which still play so great a part in our processes of "civilising" the blacks, are sold. All the rest is occupied by an interesting exhibition. On the walls are hung panoplies and musical instruments. The former are made up of cutlasses, of ungainly shapes, almost all made of blades, with small wooden handles, around which wire spirals are wound. As for the musical instruments, the most notable is a long cylindrical drum, to which our travellers have given the name of tam-tam; it reminds us a little of the Algerian darbouka, but is much longer; next to it is a sort of four-stringed guitar, very primitive.

In the showcases we are shown some rather pretty gold ornaments: rings, bracelets, necklaces, brooches, one of which, in the shape of a butterfly, is really elegant work. All these objects are the work of goldsmiths from the Guinea coast; the art of the Gabonese themselves has not yet reached this perfection.

We see the proof of this in these elephant tusks, where native draughtsmen have engraved in the ivory bizarre processions of negroes, which ascend in spirals to the point, as in a Roman column. Those from Gabon are quite barbaric. As in the drawings of children or primitive peoples, the characters are represented in profile, with front eyes. Other of these works, which will be seen in the Palais des colonies, are of a more sophisticated work. They are the work of people living on the Congo. It will be interesting to study them in detail; they will provide information on many aspects of black life. Here, for example, is a whole procession of chained slaves, or a European, easily recognisable by his clothes and hat, in conversation with the natives. Elsewhere, the artist has depicted the animals of the country: elephants or a crocodile devouring a panther:

In the pavilion we find wicker baskets woven by Gabonese people, mats and cloths made from the fibre of the raffia palm, the same tree used to build the huts. In the Pahouin village, we can see one of the looms used to make these somewhat coarse but very resistant fabrics.

This gives us a brief insight into the life and work of the inhabitants of Gabon. A large number of photographs give us information on the external aspect of the country. Some of the sites that we can contemplate here are charming, I will mention among others the American mission established on the banks of the Ogoôué, and the views of Libreville, the present capital of the colony, whose buildings disappear under an extremely dense tropical vegetation.

But we are not yet informed about the economic value of this possession. Surely it was not acquired for the sole pleasure of admiring its landscapes and inhabitants. What are its products useful for trade? This is the question that it is legitimate to ask.

We will find the desired answer in the Colonial Palace. Besides various objects of ethnographic interest, such as wooden idols, furniture belonging to chiefs, which the poorest French craftsman would not want, musical instruments, etc., we see there the main products likely to be traded.

The first is ivory, whose sole market is now England. Alongside the elephant tusks which, as we have seen, have been used for the fantasies of indigenous sculptors, we have some here, of all sizes, in their primitive state, that is to say, coated with a blackish patina which, at first sight, makes one doubt their nature. One of these tusks is particularly remarkable; it weighs 71 kilograms, is 2.5 metres long and measures 55 centimetres around. After the ivory comes the rubber; it is, as we know, the secretion of a liana. An incision is made in the vine, and the milk that comes from it is collected in a calabash. This milk, coagulated with salt, gradually solidifies, giving off a yellowish liquid; the solidified material is rubber. Here we see samples of it in its various states.

The forests which cover a large area of the colony have precious species for cabinet making, notably sandalwood or redwood, and ebony, of which we are shown some very good specimens. The Etais guineensis palm tree has fruits from which the famous palm oil is extracted, which is used today in perfumery; it is still one of the colony's export items. As for seeds and edible roots, such as millet and groundnuts, Gabon could not compete with Senegal. On the other hand, some tropical crops have been tried, tobacco, coffee, cotton, vanilla, which have so far given good results. The Europeans have to pay the natives for the products they demand. As money is not yet widespread in the country, they pay in goods and especially in cloth. The natives acquire a taste for these fabrics, they work to acquire new ones, production increases and at the same time outlets are created for goods from the metropolis. Up to now, England has had a monopoly on the manufacture of cotton fabrics used as a medium of exchange. It is to be hoped that our manufacturers, supported by protective rights, will at least succeed in taking the market in the French colonies from British competitors. Commendable efforts are being made in this direction, as evidenced by the exhibition, by Mr. Paul Dufourcq, of Rouen, Épinal and Tarare cottons intended for the colony.

The impression produced by the Gabon-Congo exhibition can only be favourable. Without doubt it is not one of those brilliant colonies, like Tunisia or Tonkin, on which one can base unlimited hopes. It is modest; but, if it still brings in little, it is fair to point out that it has not required many sacrifices, and moreover its production will only increase. Moreover, it maintains the prestige and even the preponderance of France in this equatorial Africa, where almost all the powers of Europe have wanted to carve out their share.