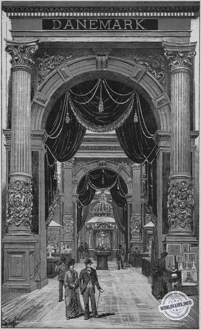 The Danish exhibition received a grant of 100,000 kroner or 139,000 francs. This subsidy was granted by the government, but was not ratified by the Danish Chamber.

Let it not be thought that this was due to antipathy for the work of France, but the Danish Chamber, which for several years has refused to vote on the budgets submitted to it, could not make an exception for the credit intended for the Paris Exhibition.

The Danish section, with 150 exhibitors, covers an area of 550 square metres, both on the Champ de Mars and on the Quai d'Orsay. The Champ de Mars section is located on the Avenue La Bourdonnais side, opposite the English section. The decoration of the Champ de Mars section is due to the brush of Mr. Lund, the greatest Danish decorative painter. He has depicted all around the gallery the main royal castles of Denmark. It was also Mr. Lund who painted the birds and flowers that adorn the façade of this exhibition, which has been organised by Mr. de Hedemann, the general curator, and Mr. Klein, a member of the Copenhagen Academy of Fine Arts.

The Danish exhibition contains a number of very interesting objects: pieces of silverware in which silver, vermeil and gold are mixed in a rather special way; very beautiful samples from the royal factory in Copenhagen; a series of interesting school works in which small workbenches where three children can work at the same time! are especially worth looking at.

But what seems most curious in the section are the works of industrial art made either by individuals or by small industrialists. Thus, in the middle of an exhibition of inlaid furniture, there is a door of absolutely remarkable work. It is the work of a carpenter, Mr. Otelberg, who gave King Christian a whole working room; similar. There is a very sensitive effort here which deserves to be mentioned. Another interesting exhibition is that of Mr. Dobereck, the locksmith, who sends objects in wrought iron which have a very artistic stamp. There are also hand-turned vases which are also interesting. The embroideries deserve a special mention. There are imitations of Gobelins which are reproduced with wonderful accuracy. Also worth seeing is the panel containing the exhibition of Mrs. Ida Hansen, a woman of the world, who exhibits a series of flowers embroidered from life and rendered in an exquisite manner.

We need not mention here two exhibitions of which the Danes are proud.

One is at the Quai d'Orsay: the exhibition of the great Danish brewer, Mr. Jacobsen, who has given Copenhagen a museum containing the masterpieces of our French artists.

The other exhibition is in the archaeology section. There you will see a copy of the Bronze Age men recently found in Denmark in such a remarkable state of preservation.

In short, the Danish exhibition is most interesting: it takes up little space, but all that it contains is curious.