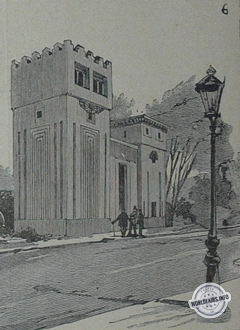 As artists, the Assyrians and Chaldeans are obviously inferior to the Egyptians, but both have their share of influence. Some of the ornamentation motifs found later in Europe are undoubtedly of Mesopotamian origin, while Egypt is recognised in statuary, in the representation of the human body. When studying the history of ancient Asia, there is no people more interesting to study than the Assyrian people. These Ninivite monarchs, always fighting, always thirsting for blood and carnage, are indeed the most typical specimens of what an exclusively warlike civilisation can produce of savagery and barbarism. In a bas-relief which, despite the ravages of time, has come down to us, we see a king of Assyria sitting in a grove next to the queen. On a table, food and cups, above, in the foliage, the salted and prepared head of the monarch defeated by the Assyrian troops! This feature, however repulsive, is significant. The Assyrians lived from war: the day they stopped fighting, their power was over.

Such a people, it is conceivable, thought little of the quiet enjoyment of art, and it is not on the banks of the Tigris that one should look for the grandiose remains of a truly artistic civilisation. The reconstruction of the Assyrian house is not without its difficulties. The Chaldean-Assyrians, not having stone at their disposal as in Egypt, built their dwellings in clay, in raw or baked bricks, i.e. they were unable to resist to bad weather. The ruins on the banks of the Tigris and Euphrates rivers are therefore absolutely shapeless. The Chaldeo-Assyrian house has the appearance of a box with horizontal or vertical sides; the sloping layout is not found. The brick walls are covered with kiln-fired bricks, carefully joined and often glazed. They are very thick, to intercept the sun's rays, which are extremely hot in this country, and often this very thickness obliged the architect to light the building through the ceiling. The window was therefore almost unknown in Assyria.