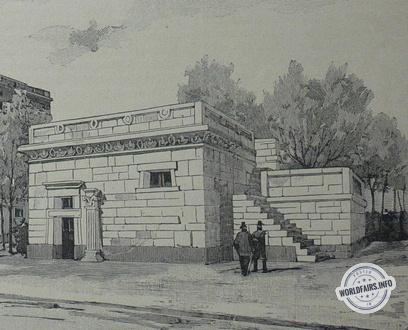 M. Garnier insisted on giving us a reconstruction of the Hebrew house. We do not regret it, but would it not have been more interesting to sacrifice the Hebrew architecture and to dedicate a building to this Persian architecture that the excavations of M. and Mme Dieulafoy have made known to the French public? This is a simple remark, not intended to be in any way derogatory.

The Israelite house, made of mud bricks, had a ceiling of palm or sycamore beams, covered by a layer of rammed earth. The walls and roofs," say Messrs Perrot and Chipiez, "had to be thick so that the temperature inside would be less affected by variations outside.

This is not quite the house of the Syrian fellah of today; the latter's dwelling is often surmounted by a cupola which gives it more height and solidity.

"Among the Hebrews, all the dwellings, like many of those still found in Syrian villages, ended in a terrace on which the night was spent at certain times of the year, and the religious laws, which often take on the character of what we call police regulations, recommended that this terrace should be surrounded by a parapet so that the sleepers and children would not be in danger of rolling to the ground.

Most of the houses had only a ground floor; however, some of the houses, some of the windows, probably especially those of the women's flat, were fitted with lattices similar to those of the moucharabiés - of the contemporary Arab house. It should be added that the Hebrew house borrows from the Egyptian type its general form, massive and square, but without making use of the columns, which in the ancient monuments of Egypt play such a great role and which are also found in those of Phoenicia.

Inside was a courtyard, with a well or cistern.