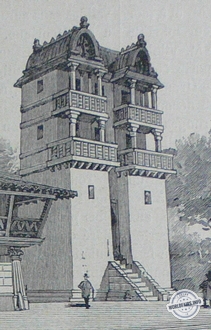 There was a time when Arabo-Persian art exerted its influence on India, but for a long time several indigenous architectures had developed in this country.

Through the variety of ornamentation that differentiates the monuments of the vast peninsula, it is difficult, if not impossible, to identify common features. However, M. Garnier thought it necessary to give place to a Hindu type.

Two vast and rather high towers almost alone constitute the building, for they leave only an extremely narrow body of building between them.

The basement is of great importance, and it can be seen on our figure that it is higher than half the building. The richly ornamented turrets soften the impression of heaviness created by the basement: they are equipped with balconies on top of each other, onto which the windows open. From the two lower balconies rise columns whose capitals support the upper balconies and are continued by other columns that support an elegantly moulded entablature. A gable with an ogival outline crowns the turrets, and inside is a shell decoration.

Whatever period the monuments of India belong to, the same characters always dominate. The lines," says M. Buyet, "are intermingled and entangled, the ornamentation is everywhere; the sense of simplicity, of logical and clear orders is absent. In the sculpture, "little understanding of composition, and the more dramatic the subject, the greater the confusion. However rich and brilliant in its whims, Hindu art lacks the qualities that make strong and truly beautiful works. Everywhere the same intemperance is manifested as in literature: the Hindu imagination ignores measure, it spreads itself in creations often full of a strange charm, often also disordered and monstrous; figures and ornaments multiply in their buildings with the same profusion as comparisons and metaphors in their poems. At the same time as religion spread in the Far East, the art of India gave birth to the exuberant Khmer architecture in Cambodia.