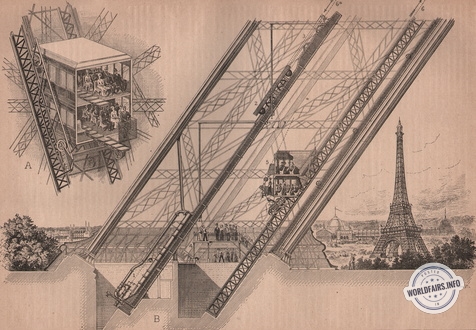 From the ground to the first floor there are two lifts of the Roux system, Combaluzier and Lepape.

From the first floor to the second, the ascent is made by means of an Otis lift, placed in the south stack. This lift never touches the ground and is used exclusively for passengers going from the first to the second platform.

Another Otis lift in the north pier goes directly from the ground to the second floor without stopping.

Finally, from the second floor to the upper platform, below the bell tower, there is an Edoux lift. All of them are powered by water.

This organ acts by compression like an ordinary piston and is enclosed in a sheath which prevents any lateral movement. This large chain is driven by an impression wheel at ground level, around which it is wound, like a dredge chain, to form an endless chain supported by a pulley on the first floor.

One wall of the cabin is connected to one strand of this chain and follows its movement; the other wall is connected to a similar chain. The car is thus driven by a double system of chains, acting simultaneously: in the event of a break in the chain of pistons, all the elements being imprisoned in a rigid sheath, the contact of one to the other always takes place and thus prevents any fall from occurring: at most a stop can take place.

The movement is imparted to the chains by a double system of plunging pistons under the action of water stored in tanks placed at a height of 115 metres.

The speed of these two lifts will be 1 metre per second and each cabin will contain 100 passengers who will thus reach the level of the first platform in one minute.

A cast iron cylinder is placed in the foot of the Tower parallel to the inclination of the crossbeams; in this cylinder a piston moves, driven by water taken from tanks installed on the second floor and, therefore, at a pressure of 11 to 12 atmospheres. The piston rod acts on a carriage carrying six mobile pulleys; each of these pulleys corresponds to a fixed pulley of the same diameter, so as to constitute a real hoist.
This enormous block is guided by pulleys placed at different distances above the second floor, and comes back down to the cabin; as a result, for a movement of 1 metre of the piston in the cylinder, the cabin goes up or down 12 metres.

The steel wire cables that suspend the cabin are six in number. Only one of these cables could support the weight of the cabin and the passengers without breaking.

In addition, a safety brake with shoes has been placed under the cabin, which would operate automatically in the event of breakage or even abnormal elongation of one of the cables.

The cabin of this lift will only hold fifty passengers; but as its ascension speed will be two metres per second, i.e. double the speed of other lifts, its efficiency will also be high.

The first cabin is carried by two hydraulic press pistons, articulated at the top to a spreader bar, the middle of which carries the cabin.

From the upper part of this first car and from the two ends of the beam, four cables run which, passing over pulleys established at the top of the Tower, support the second car; two of the cables are attached to a beam, from the middle of which this car is suspended; the other two cables are fixed directly to the body of the car itself and are intended to serve as a safety system.

The guidance of the lift is formed by a solid box girder occupying the centre of the Tower, 160m,40, and by two other girders of smaller sections.

The cabins, which must be able to lift 750 people per hour, have a surface area of 14 square metres and can hold approximately 63 people. As each cabin only covers half of the total distance, there will be an exchange from one to the other at the height of the intermediate floor; this exchange will be made by two separate paths and therefore without loss of time. The duration of an ascent, with a speed of 0.90 m per second, can be broken down as follows: one and a half minutes for the run of each cabin and one minute for the passage from one to the other, i.e. five minutes for a return journey, or four minutes for the duration of the journey from the second platform to the top.

A very powerful brake ensures that no accident can occur: even if a major component of the lift should break, the visitors carried by the cabin would not have to fear any fall.

All the lifts can lift 2,350 people per hour to the first and second floors and 750 people to the top.

In addition, 10,000 visitors can be in the Tower at the same time, on the different platforms, in the staircases or in the lifts, without there being any congestion!