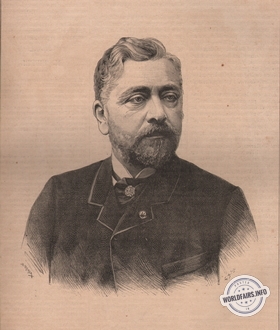 Of medium height, with a fine and lively face, harmonious and sympathetic speech, clear blue eyes, a round face framed by a very short beard, half-curled hair, already whitened by study, such is Mr. Eiffel, whose name is now known throughout the world.

In spite of the fame of his successes, this scientist has remained, as in his younger days, a shy, patient and sad man: it seems as if he is always looking beyond and that the dream of his thought is flying further and further up.

On 30 March, Mr Eiffel received the cross of Officer of the Legion of Honour from Mr Tirard, President of the Council.
This was the first award given on the occasion of the Ex-position, and if ever an award was deserved, it is this one.

The building sites of the Tower were directed by M. Compagnon, chief of works, and M. Milon, deputy chief. The chief draughtsman was Mr. Pluot. The architect, M. Sauvestre, who was charged by M. Eiffel with the decoration of the platforms.


The workers of the Tower.

In this gigantic construction, the workers were never very numerous and this is one of the most curious particularities to be mentioned. There were never on this immense building site the numerous and noisy teams to which the imagination predicts an excess of movement, noise and life: the teams were restricted and silent; the iron itself was no longer noisy and the reason for this is marvellous in its simplicity: it was in Levallois-Perret that everything was prepared. Each piece arrived in front of the Jena bridge, perfect, completely finished with its own number: each one fitted to the previous one, mechanically, in an immutable order, and not a single rivet hole was made.

So there were no tools for drilling, boring, bending or grinding on the spot: and two hundred workers were more than enough for this assembly work. During a whole part of the work, there were only 150 men.

A curious detail:
Many of the workers from the Tower's construction sites did not make the full ascent until the day of the inauguration, behind the official procession. They were employed in the improvised station on the first floor or in the wood and iron warehouse installed on the second platform; they regulated the running of the machines, manoeuvred the winches that lifted pieces weighing three or four thousand tonnes, or pushed the wagons loaded with rivets onto the rails, which the mobile cranes on the upper floors then removed like a bundle of straw.

It took three quarters of an hour to hoist a piece of iron 220 metres.
On the second floor, a few metres from the Figaro pavilion, a supply canteen had been installed for the workers, a long, low room where two stoves burned continuously and where meals were served at considerable discounts. Mr. Eiffel had wanted the restaurant owner to charge the staff only half the price of the neighbouring wine merchants, and under this absolute condition he had provided the fuel and given the kitchen contractor the sum of 60 centimes per lunch. The workman thus had to pay only an insignificant sum for lunch; and he wasted neither time nor strength in repeated ascents.

The one who was really exposed was the painter or the riveter who would perch with two or three of his companions in the meshes of this immense aviary, lie down two hundred metres away on the transparent fabric, add to the iron rods other iron rods, or pass a new tint up there, always higher. This one was ready for all winds, all rains, all dangers, all cold. Last winter, 11 had up to 8 or 10 degrees of cold.

But there are hardly twenty or thirty comrades like him. They are a few elite workers accustomed to these fatigues, the faithful of the Eiffel factory, those who, in the middle of winter, have already built the Garabit viaduct, in the Cantal, and who have endured many other ordeals above the chasms of the Truyère, where the cold often exceeded fifteen degrees.

Besides, next to them was almost always a small mobile forge filled with a red blaze. The forge was continually needed for their painstaking work, since huge burning nails had to be driven into the holes made in the iron in advance, and riveted to the blank.
So, until the ice of January 1889, almost all the workers refused to wear the sheepskin clothes that Mr. Eiffel had had prepared for them: the otter cap with the brim pulled down over the ears and the thick knitwear were enough for them.

In the afternoon, moreover, the temperature was very noticeably altered, and from noon to five o'clock the thermometer, from the second floor upwards, marked one degree below zero or zero degrees. Sometimes, when the fog hung over Paris, it was even warmer on the top of the Tower than in its foundations, because the top alone, hovering above the damp clouds, received the sun's rays directly.

There will be some very curious experiments on this subject for the Academy of Sciences.