What the Tower cost - 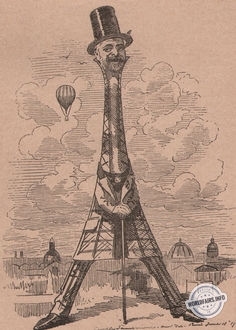 What the Tower cost.

Moreover, Mr. Eiffel did not strictly adhere to his original plan, but rather tried to modify it whenever he was aware of the need for improvement. To this end, he used almost 600 tons of additional iron in the part between the foundations and the first floor. The iron and cast iron of this floor represent a weight of 3 million 562,800 kilograms.
The lifts cost 600,000 francs more than expected.
Of this sum of 6,500,000 francs, the State gave M. Eiffel a subsidy of 1,500,000 francs and the City of Paris granted the land. But within a period of twenty years from the closing of the Exhibition, the Tower will belong to the State.
In the meantime, the enjoyment of the Tower belongs to a financial company, the Société de la Tour Eiffel, which was formed by Mr. Eiffel and two or three large banking houses. The capital is five million one hundred thousand francs. The 100,000 francs represent the necessary working capital. The five million represents the value; there has been no public issue. Half of the shares were given back to Mr. Eiffel for his contributions; the other half was divided among the operating companies.
It is almost certain that the receipts from this one year of the Exhibition will be sufficient to repay the capital in full. The product of the ascents during the other twenty years would thus constitute the net profit of this operation which will perhaps be both the greatest of this century from the industrial point of view and the best from the financial point of view.