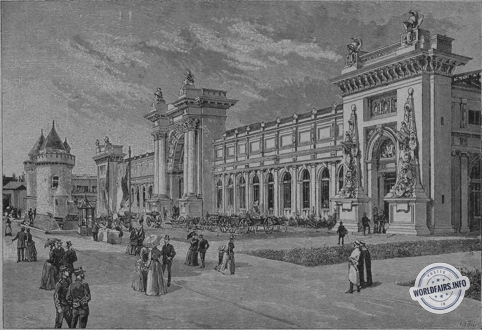 This enormous construction extends over a length of 150 metres and is treated in the Louis XIV style. The central part has a Corinthian triumphal park, and the two ends are accentuated by two large motifs, reminiscent of the Saint-Denis gate. The general aspect is imposing, the details are quite studied, it is not ugly, but it takes up space. What is less successful is the medieval gate, flanked by two crenellated towers which, placed in front of the courtyard where the models of artillery pieces are arranged, forms the main entrance to the military exhibition.

It includes all the equipment and procedures of the art of war. Everything that man has invented up to now to attack and defend himself is there, and, let us admit it, excites the patriotic freedom that every Frenchman carries in his heart. The artillery and the engineers display the accuracy of their calculations in all the models of siege, field, fortress, bridge, etc. pieces.

We will insist on the importance of the exhibition of the geographical service, which sent remarkable maps and instruments. The map of France to the 80,000th scale, known as the "Carte d'état-major", is naturally included. The execution of this map was prescribed by the royal order of 6 August 1817. What is most striking about this remarkable work, whose engraved surface covers more than 100 square metres, and whose work was carried out by nearly 800 officers or geodesic artists, topographers, draughtsmen and engravers, is the homogeneity and harmony that characterise its execution. The 273 sheets that make it up, engraved by more than 65 different artists, seem to have been executed by the same hand. Completely delivered to the public, it is subject to periodic revision in the field, and constantly updated by means of the zincographic edition.

As for the retrospective military exhibition, its aim was to present history in a more striking way than could be done by reading books or manuscripts. It is divided into ten parts. In the first part are the memories and portraits of the men of war of France, from the Gaul on his war chariot to the generals of our time. We see these warriors, as far as possible, as their contemporaries depicted them from life. It is only from the eighteenth century onwards that the series of portraits really becomes numerous. In addition to the portraits, there are also objects that belonged to our great captains, their weapons or their clothes.

In the same series is added a collection of written monuments, of the most interesting on the history of the war: letters of famous generals, statements of situation of the most numerous armies, plans of battle, orders of the day.

Moving from men to things, the following sections lead us to the history of armament and costume. They also embrace military science, and by following the long line of attack and defence devices, we see by what progressive series of efforts and research human genius has arrived at modern inventions.

As far as the period before the Renaissance is concerned, the series is far from complete, but a few weapons and a few reminders of chivalry have survived the passage of time and still exist, like the vestiges of a vanished age which, in a way, allow the archaeologist and the historian to reconstruct the past of our ancestors.

In the sixteenth century, the armies took on the constitution they have today; they were formed into regiments. The arms themselves, artillery, engineers and cavalry, became distinct. With the creation of the regiments, the ensigns become the rallying sign of these meetings of men, which form warlike families, with their traditions and their memories. It is on these ensigns and flags that the glorious feats of arms of each corps are inscribed. The flag of the 12th half-brigade at Arcole, the Gallic cockerel of the 47th line at the breach of Constantine. The form is different, but the idea is the same: it is France which is personified under these various emblems. It was of the utmost importance to reproduce the history of the flag in the eyes of all the French.

Next to the War Palace, a special building is reserved for the aerostation.