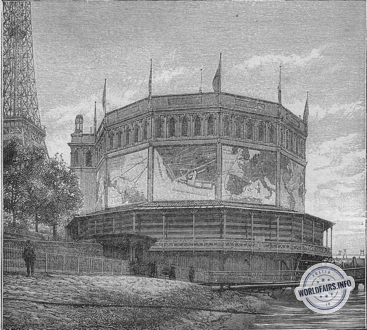 No sooner do you enter the panorama of the Champ de Mars than you are suddenly transported to the heart of a ship. Dark and narrow corridors, lit from left to right by portholes, represent, with a certain fidelity, the cursives of a ship. A smell of tar, spread everywhere, completes the local colour; I should say: local smell. We pass through the travellers' cabins, fitted out with great luxury. A small staircase comes into view. You climb it and suddenly you find yourself transported to the dock of a huge liner, the Touraine, as it will be later. In reality, the Touraine still rests on the holds of the construction site. This little subterfuge, by putting the spectator on a non-existent liner, has the advantage of letting him see the whole existing fleet.

On this deck, the rigging is hanging, the ropes are winding on the floor, the helmsman is operating the steering wheel, the compass needle is shaking in the cockpit, the captain, leaning over the rail, is giving the last orders. The ship is on its way. Passengers from the bow and stern crowd the deck, taking a last look at the land of France which, in a few minutes, will gradually fade into the distance and disappear completely under the sea horizon. Along the embankments of Touraine the sea laps, shimmers, sparkles. Sailing yachts, to see it more closely, tack and sail in its waters, with the whirling of great white-winged sea birds. Light yachts, carrying late passengers, return to the port, full of smoke, their bows white with foam, leaving behind them a deep wake, whose undulations moiré the surface of the water.

We too, curious visitors, are going to leave. At least, the impression is given. And what a departure! The sun's rays sparkle as far as the eye can see, drowning in their golden waves the immense horizon of the mouth of the Seine, which forms the harbour of Le Havre, whose white houses are spread out on the sides of the hill. Over there, the sharp edge of the Pointe de la Hève; here, the receding hills that border the Seine; on this side, the green and dark hillsides of Ronfleur and Trouville; on that other side, the endless horizon hiding the English coast. In this gigantic setting, the calm, peaceful sea, the sea of multiple tones, and, on it, proud of their strength and their majesty, all the liners of the Company, strutting, attending the departure of the youngest brother. This is Gascony, this is Champagne, this is Normandy, this is Brittany. In the luminous atmosphere that surrounds them, one sees their particular signs, their own individuality. Those who know them cannot make a mistake and put on this one the name of that one.

Once the tour of the poop deck is over, we go back down to the steerage. A new spectacle awaits us there. Instead of cabins lined up along the curves, there are dioramas, i.e. large paintings on large canvases which, instead of being circular like those of the panorama, are stretched on a vertical plane. The lighting, skilfully arranged, varies the general and local tones in such a way as to produce, either on a few points or on the whole picture, all the natural or artificial lighting effects.

The Transatlantic dioramas each represent a distinct part of the ship: the lounge, the dining room, the smoking room, the cabins of the different classes, the embarkation, etc., etc. Others show different ports more particularly frequented by the Company's liners. It is Marseille with its old walls reddened at the top by the fires of the setting sun, tarnished at the bottom by the waves of the Mediterranean; it is Algiers with its tiers of white houses, bursting into the dark greenery of exotic plants; it is New York with the grandiose and luminous panorama of its harbour.