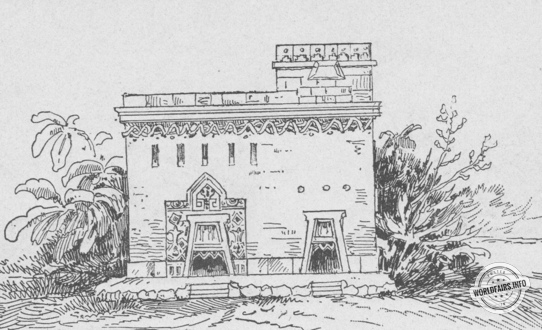 We still find Algeria at the Champ de Mars in the History of Housing, where M. Garnier shows an Arab house in the 16th century.

Let us not dispute the date, for art seems to be unchanging in these indolent countries of the sun: it is always the same balconies supported by beams, the same white arcades, the same cut-out wooden moucharabiés.

The Chinese and Japanese dwellings that follow make a rather sad figure next to the marvels that the Esplanade des Invalides offers us in this genre; and this is the great flaw in the collection of M. Gh. The history of housing is everywhere at the Exposition: in the Rue du Caire, in Indo-China, in the Javanese Kampong, in the Scandinavian houses, in the pavilions of the Americas; and next to the gigantic Hindu or Mexican temples, next to the life-size palaces that all the peoples of the new world have erected at great expense at the foot of the Eiffel Tower, the tiny reductions of the famous architect lose, it has to be said, their interest. Yet the reconstruction is conscientious and learned; the rarest and most serious documents have been used, and Mr. Netto, the director of the museum of Rio-Janeiro, who has installed in the house of the Incas a small museum of American antiquities, was struck by the marvellous accuracy that Mr. Garnier had brought to the construction of these ancient dwellings of the Aztecs and Incas.