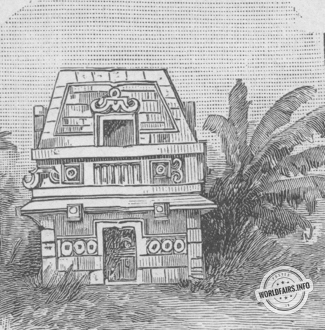 Beyond this village we find architecture, that of the peoples of ancient Mexico and Peru; it is first of all the Aztec dwelling which is very curious.

M. Charles Garnier was obviously inspired by the pyramidal temples, called teocallis, which have been discovered, and which are still found in the Yucatan; but also by the remains of palaces which are still to be seen in the country, for here the pyramid is truncated and stops just in time for the roofs to be habitable up to the top.

The whole house is made of cut stone and its architecture bears witness to an advanced civilisation, which makes us regret that we thought we had to give the name of Aztecs to these two runts, as much like beasts as men, which were exhibited some twenty years ago in the circuses of Europe.

These Aztecs had nothing in common with the peoples who inhabited Mexico when Fernando Cortez came to exterminate them, under the pretext of civilising the country.

The building restored by M. Garnier is not without affinity of style with its Egyptian type, which does not mean that the ancients knew the new world and that Christopher Columbus did not make a real discovery, but it is a fact to be noted, much more easily still for the Inca type, which we shall see shortly.

Here the openings are rectangular, or more or less, but the front façade of the half-storey, which we call the entresol, is trapezoidal, like the gable, and framed, like the gable, by a massive fascia.

It is true that the window opening in this gable, like the one on the roof, is of a very particular architecture.

The ground floor is separated from the mezzanine by a sort of ashlar canopy, which runs around the house and is supported from distance to distance by stone brackets.

This too is special to Aztec architecture, but it seems heavy in a building that is necessarily small, and whose façade cannot take on the development of a palace.