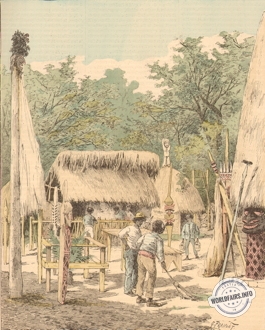 Not far from the Senegal Pavilion and near the Annamite, Tonkinese and Malagasy installations, a small Canaque village attracts the curious. It consists of half a dozen huts, made of bark, covered with thatch, and housing seven New Caledonians or New Hebrides, kinky, dressed in European style, and three women, whose wide, flowing dressing gowns poorly conceal their plump forms.

Almost all of these natives have deserved well of France by their loyalty and devotion. On the chest of one of them, Pita, son of the chief of the Gelima tribe, is a gold medal, awarded to him for his energetic support during the 1878 insurrection. Another, Badimoin, teaches French to the young school children of Canala. The chief's hut, raised in the shape of a cone rather like a beehive, is surmounted by a sort of ear made of shells. The other three, lower, are also narrower. In the evening, they are filled with smoke, to drive away, as much as possible, the mosquitoes, and the inhabitants are half asphyxiated.

The Canaque exhibition is far from complete: the flora and fauna of New Caledonia are not represented, but it is not lacking in interest. In the huts hang long strips of manou, a white cloth made from the bark of the macaw tree, which was once used as money. The door, which can only be passed through by bending down, is made of roughly sculpted poles representing grotesque human heads, called taboos. We find these sculptures next to the ironwood assegais and javelins, on the huts and in every corner of the little village; they are not idols, but, like the statues in our squares, simple ornaments made of niaouli. Niaouli (melalenca viridiflora) is the building wood par excellence. Its smooth bark is waterproof, thanks to a resinous substance which also allows it to be transformed into a torch.

Unable to fish or hunt, New Caledonians spend most of the day in their huts, talking and reading newspapers.