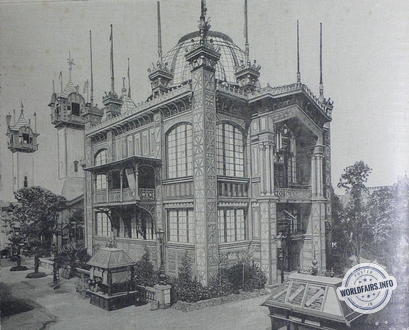 The Chilean government had put the construction of its pavilion out to tender, and certainly the conditions of the competition were not the easiest to meet. It had to be an original building, not reproducing any existing construction, containing a ground floor and a gallery on the first floor, built of iron and panels of various materials, all of which could be dismantled easily and transported to Chile after the Exhibition.

Finally, the pavilion had to be earthquake-proof, of interest to the Chileans, and cost no more than 140,000 francs in all, from the preliminary earthworks to the restoration of the site after the pavilion had been dismantled.

If one considers that the land on which this pavilion stands occupies an area of 500 metres in the small park of the Champ de Mars, near the second right-hand foot of the Eiffel Tower, with its back to the Seine, one will certainly find that it was difficult to do a better job than Messrs. Moisant, Laurent, Savey et Cie, authors of the prize-winning project, a programme enclosed within such strict limits of economy and including such requirements, that the pavilion, not content to interest the Chileans, had to be able to resist earthquakes.

For our personal taste, we find that there are quite a few domes in the awarded and executed project. One on the central building, and four more on the rectangular pylons that flank the four corners of this building.

This abundance of domes gives a strange rather than original appearance to the Chilean pavilion, but the projecting portico which holds the entire height of the building and opens onto a wide perron the three bays of the peristyle, offers a truly monumental character.

At the height of the first floor a balcony, forming on the opposite side of the facade a sort of winter garden, reigns over the four faces of the pavilion; it is interior in front and behind and corbelled on the sides; the side balconies covered with a canopy form pretty verandas.