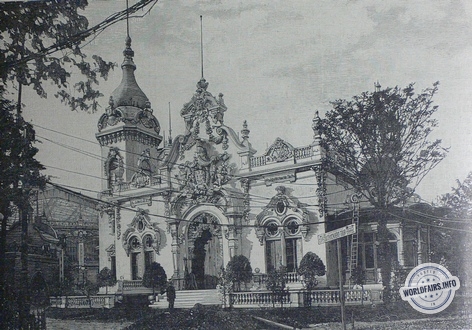 It is not very big, the Venezuela Pavilion, but it is charming, and it is certainly of all those of the South American States that one looks at with the most displeasure.

All white, between Ecuador, which is grey, and Mexico, which is terracotta, not far from Bolivia and the Argentine Republic, which are multicoloured, it stands out all the more in all its elegance.

The architect in charge of this construction built it in the style of the Spanish Renaissance, and he could not have done it better.

The large door reminds one a little of the Sagrario church in Mexico City, but all religious character is removed by the pediment above it, where two children, symbolising Industry and Peace, support the coat of arms of the State.

The façade, which also has two beautiful windows, is flanked on one side by a delightful turret covered with a pear-shaped dome and decorated with corbelled balconies on its three open sides.

The kiosk which follows on from the turret is not so good, with its Chinese-style rolled-up roof; it could also be criticised for having a yellow, red and blue tile roof, but these are the national colours, and as such they have the right not to harmonise with the rest of the building.