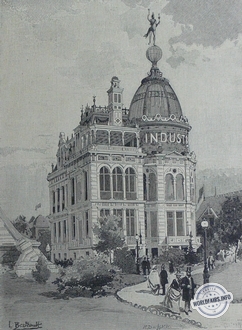 I once heard the amusing argument that gas lighting, far from being a step forward, was a retrograde invention.

Here is how the demonstrator proceeded: Suppose that in the beginning, about the time God said "Let there be light", this light for domestic purposes, apart from that which the sun provides us with free of charge, had been in the form of gas lighting; Suppose, moreover, that from the very first day our ancestors, anthropoids, sons of the great apes, or contemporaries of the reindeer, had possessed the means of producing gas, of channelling it, of burning it; obviously, at the end of a more or less long period of time, there would have been a grumpy spirit to say:
- It is very beautiful your gas, but what factories, what gasometers, what piping, what risers. Ah, if only we could bottle the gas.
And the engineers of the time would have tried to bottle, if not gas, at least light, and the Revue des inventions et découvertes of the time would have mentioned it, and the Exhibitions of the time would have awarded medals to a wonderful invention, lighting oil.
No more installations, no more complicated devices, no more danger of explosions. You buy your light at the grocer's, by the litre or by the half-pint. You pour the oil into a special container and all you have to do is turn it on. That's progress.

Some time later, this progress, in turn, would have seemed insufficient and the same cranky spirit or one of his successors, would have cried out:
- How many manipulations and how many dirty operations. The oil stains, your lamps get dirty. Put it on a stick and it will be a wonderful progress.

And if, from engineer to engineer, we had arrived at the candle, or even the ancient candle, everyone would have been amazed and would have cried miracle and the inventor would have been decorated with all the orders of his time.

But you see, we started with the torch, which is the elder sister of the candle, continued with oil and ended with gas. So we have walked backwards from progress, embarrassing ourselves every day with more and more complicated devices.

You can see that the paradox is right.

It is all the more right because the inventor of gas did not dream of collective lighting at all. In his first dreams, every household had a wood distillery that provided gas for lighting, heat for cooking and heating flats, vinegar for salad and... tar.

Tar... What for? As a character in Gogol's Dead Souls says... in a household it can always be used,

But gas did not go down this road, and apart from a few large factories or a few billionaires' castles, very few specific installations were established for gas production.

And what proves how right the above thesis is, is that the success of electric lighting comes precisely, - apart from the beauty of the light, - with the convenience that there is to install oneself, all alone and without having to count on the neighbour.

Nevertheless, gas does not desert the fight against its formidable adversary, electricity. It has the advantage of an acquired situation, of existing installations. It also claims that it offers resources that are still unknown, and it is to show the use of these resources that an elegant pavilion has been built on the Champ de Mars, at the foot of the Eiffel Tower, the expenses of which have been borne by the community of gas industries in France.

We bled to death to prove that the little gas man is still alive, and backed by sufficient funds, the architect M. Pieq has done things very nicely: he has built a ravishing Renaissance hotel, all white and with large glass windows, in which gas is used in all its forms, for lighting, heating and ventilation. He even runs engines; but this seems to me to be clumsy, because the first care of a hotel owner who has a gas engine is to use it to light himself with electricity.

In the evening the palace blazes through all its openings, the dome which surmounts it, and which is itself surmounted by a sphere, is but a great blaze of white light reflected in the adjoining water-piece. It is a very pretty residence, very fin de siècle, I would even say very twentieth century, if it were not raised to the glory of gas lighting which, in ten years, will perhaps have gone to join the old moons.