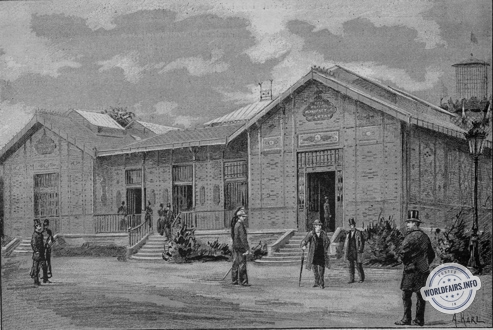 As for the location, the State knew how to choose, and it was right to do so, since it is called Lion, and it is at the entrance to the Champ de Mars, by the Pont d'Iéna, at the foot of the Eiffel Tower, that one finds the Pavilion of the Ministry of Finance, which contains both the exhibition of the State's tobacco factories and a sales office for tobacco and luxury cigars.

This pavilion is composed of two pavilions in the foreground, joined by a gallery which forms a balcony and a veranda; three small stoops give access to the pavilions and the gallery. The construction is very simple, with exposed iron and yellow brick with glazed brick highlights. It is rather severe, but it has been brightened up with a few metal sconces and enamel flowers that climb up the windows and doors. The shop sells only luxury tobacco and cigars, cigarettes in boxes of at least fifty and cigars in varying quantities depending on the price. Some of these prices are very high, but they are only reached by imported cigars, which should not, strictly speaking, be listed there, since they are not produced by the state factories, but are only imported by the régie.

The main high-priced cigars come, of course, from Havana. They bear fancy names, and are decked out in silk and gold like Spanish archbishop's mules. I will introduce them to you by name.

Here, at two francs, are the Sin iguales cigars, - that must mean the Sans égaux; this eminently aristocratic name, which would have enraged the immortal Babœuf, obviously proves that these cigars are not made for proletarians.
The Cesares are three francs a piece; they are obviously "exquisite cigars" reserved for aspirants to the dictatorship.
The Villares, whose more modest name says nothing to my linguistic ignorance, nevertheless cost four francs a piece, but they pale in comparison to the Invencibles, which obviously translates as invincible, which don't come for less than a whole penny, which is a nice price for a cigar.
I have an idea that they could not be sold at such a high price if they were christened in a less pompous manner. They know, in Spanish America, what a good label is worth, come on! and it is not for nothing that President Guzman Blanco had awarded himself by decree the title of Illustrious American.
But let us leave this "proupos", as old Rabelais says, and see the Exhibition itself, which is more interesting than these millionaires' cigars.

It consists first of all of reductions of the apparatus used for the preparation of tobacco, triturators, dryers, wetters, etc.; a model of a laboratory for the dosage of tobacco, and finally, which constitutes the really interesting part, a small tobacco factory in full activity, and which is surrounded every day by a numerous public.
There are a dozen workers there, around whom the curious crowd; it should even be noted that these curious people often have hurtful curiosities: they look under the noses of the poor girls, and in an hour one can hear fifty times this idiotic observation:
- Finally, there are all sorts of jobs.

This simply expresses the astonishment of visitors in the presence of the young woman who packs tobacco.
They do not have the picturesque character of the Spanish cigar makers, staged with the music of the late Bizet, our brave workers in the tobacco factories; nevertheless their work is very interesting. Three operations can be seen here:
The making of 50 cent packets of tobacco;
Making cigarettes;
Spinning of chewing tobacco, as the management says, or chewing tobacco, as it is commonly known.

The making of tobacco packets, which seems a fairly simple operation, is however very complicated, and a packet passes through the hands of four workers before it is finished.

The first has two iron templates in front of her, on each of which she places a sheet of paper which she folds, thus forming a square bag on which the white band is placed; at the same time the glue which will close the packet is applied to the places which cannot yet be folded.

Meanwhile, another worker, who has a scale in front of her, throws in a handful of tobacco which must weigh 40 grams. The worker's skill is such that it is very rare that the handful does not weigh the right amount. The worker throws this handful into a kind of square funnel. This funnel being a twin, i.e. coupled to another one exactly like it, she makes two weighings, the whole operation being carried on by two packets at a time.

Then a third worker, placed between the first two, brings to her the templates covered with paper bag, coated with glue. She reverses the templates, removes them, leaving the bags placed under a kind of press. Then she brings the double funnel over the bags: a pressure opens the bottom of the funnels which are emptied and withdrawn, a second pressure pushes the tobacco into the bags which are closed in a flash. And there you have it, two packs made. Three workers can make 600 packs in an hour.

But the management is scrupulous, and before delivering its tobacco to the consumer, it checks the weight of each packet; this is done with the help of a marvellous machine with which one worker can sort 1,200 packets an hour according to their weight, just the work of two teams of packers.

The packets are placed on a sort of endless belt that carries them one by one onto a fork, which places them on a weighing pan. This plate moves a needle at the other end of the apparatus, which indicates by its deviation not the exact weight of the packet, but whether it weighs the same or more or less. After remaining on the plate for a second, the package automatically falls back into a pipe closed by a triple valve. During this time, the deviation of the needle has caused one of the valves to open: the one in the middle if the packet weighs the right amount, the one on the right if it is too little, the one on the left if it is too heavy, and the packet falls through the valve that is open and closes behind it, into one of the three baskets placed under the apparatus. I assure you that it is a marvel of intelligence and speed.

The cigarette-making machine requires only one worker for its service. There are different models of these machines depending on whether they are to make cigarettes closed at one end, according to the old model, filled with a tube (Russian cigarettes) and amber at the end, or open on both sides (elegant cigarettes).
The machine on display produces 46,000 to 47,000 elegant cigarettes a day.

The cigarette paper is wound into a roll of several hundred metres at one end of the machine. Under the action of the motor or the pedal, it passes first under a small stamp which stamps it with the mark of the management; then into a tube and onto a sleeve which gives it the tubular shape. In the past, cigarettes were glued, today they are simply stapled, i.e. the machine takes hold of the two edges of the paper and folds them, after which they pass under a grooved wheel, the strong pressure of which is sufficient to make them adhere.

A shear then cuts the paper tube to a suitable length, which is brought before a sort of drawer. An endless ribbon brought the tobacco to this drawer, which on its way is levelled and rolled, and finally introduced into the drawer, where a piston, which operates perpendicular to the length of the drawer, packs it and gives it consistency. Then another piston, this one running along the length of the drawer, pushes the tobacco through an opening in front of which a paper tube has been placed. The cigarette is made. It can be seen that a single machine has carried out the following operations: marking, rolling, stapling and cutting the paper, rolling and packing the tobacco, filling the tube. Finally, it puts the cigarettes in a box.

This is a more elegant operation than spinning chewing tobacco, but it is less complicated. The leaves, chosen from among the longest and kept moist, are spread out, flattened and straightened as much as possible, then placed between two sleeves which roll them up, then introduce them into a series of dies which give them the desired calibre and consistency. The most curious part of this machine is the spool that finishes it, which is animated by a double rotation movement; the first one winds the tobacco thread - it is called a thread - around the spool, while the second movement, perpendicular to the first one, twists this thread on itself.

The manufacture of snuff is not shown in operation. It is a purely industrial process, using powerful machines that transform the tobacco core into powder. It is almost like milling, and we can see that our factories are far from the grater that our fathers used to grind their Virginia carrot into powder, a grater that made the song whose father remains anonymous, but which the Abbé de Latteignant lengthened, say:
I have good tobacco in my snuffbox,
I have good tobacco, you won't have any.
I have fresh and grated tobacco,
But it's not for your ugly self.
I've got good tobacco