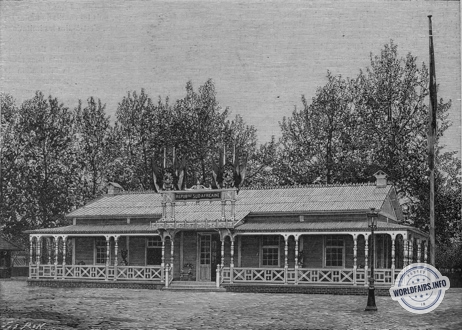 On the Esplanade des Invalides, not far from the Algerian, Tunisian and Colonial Exhibitions, is the graceful pavilion of the Republic of South Africa or Transvaal.

It is at the end, quite at the end of the world, beyond the Cape of Good Hope, between the Republic of Orange and Zuuland, that this small State, whose capital, Pretoria, has at least today twenty-five thousand inhabitants, flourishes, and which wanted to be represented with dignity at the Exhibition of a friendly nation.

His wish was granted. Thanks to the distinguished talent of Mr. Marchegay, engineer of arts and manufactures, we have, near the Seine, a delightful building which reminds us quite completely of the elegant and original houses of Pretoria, surrounded by trees and hedges, pomegranates and roses.

Entirely built of wood, this pavilion, consisting of a single room, quadrangular in shape and of fairly large dimensions, is surrounded by a veranda embellished by small columns and balustrades, whose blue paint on a white background gives the pavilion a lovely note of light sunshine.

Its roof, made of corrugated iron, the low height of the room, its sash windows, remove any banality from it and classify it among the most original constructions of the Exhibition, all proportions kept of course.

The interior installation of the South African Pavilion leaves nothing to be desired; it may even be said that it was carried out with real talent and good taste by the organisers, Messrs. de Villiers, the Government Commissioner General, and Van der Burg, the delegated member of the Pretoria Committee.

The result was made easy by the fact that preparations for the Exhibition had been made at least a year before it opened. Many great nations should have followed the example of this little Republic which, as early as May 1888, had a committee formed in Pretoria, and a credit of £300 voted by the Legislative Assembly.

Among the products which we find inside the pavilion, those of the mining exhibition occupy the first place. There, in perfect order, are arranged the principal riches of the country, admirable collections of iron, lead, copper, zinc and silver ores.

Then, next to them, but in another display case, were lined up superb gold ingots, which had been extracted from alluvial soils, situated mainly in the Pretoria and Zoutpansberg districts; then gold nuggets, two of which were of extraordinary dimensions, since they weighed at least 87 ounces.

Let us confess it, for the confusion of our poor humanity; it is there, around this showcase, these golden stones, that the crowd is the most numerous; it is there that miserly people with contemplative faces, beggars and bohemians in disguise gather. O religion of gold!... how many followers you still have!...

Next to the nuggets, a gilded zinc obelisk gives an idea of the monthly production of gold in the Witucatersrand mines. It is 2 metres high and represents a gold weight of about 10,000 kilograms, which translates into a little over 30 million francs.

Mammals, reptiles, birds with their nests, elephants' teeth, wild animal skins, ostrich feathers, abound alongside samples of cereals, which, by their quantity and quality, sufficiently indicate that cultivation is far from routine and that the soil is very productive.

In a small room, very well arranged, are grouped numerous objects in use among the Transvaal Cafes and which, for the amateurs of ethnographic studies, must be of great interest. They include pottery, ornaments, idols, domestic instruments and weapons which, although crude, are no less dangerous.

As can be seen, this little Exhibition is quite remarkable, both externally and internally.

It is a credit to the little South African Republic and shows a vigorous effort on its part, which only requires encouragement to grow from day to day.