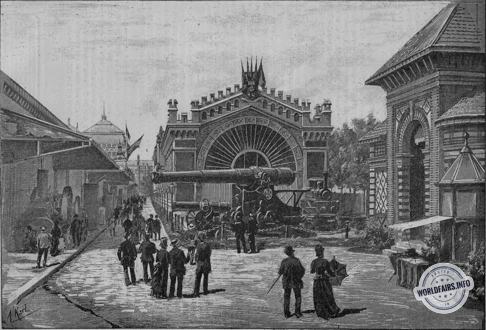 This exhibition is one of the most successful.

How many sympathies, indeed, surround this house which is perhaps destined to disappear! For no one has forgotten the immense services it rendered during the siege of Paris.
Indeed, by a tour de force, it was able, in less than a month, to install mills capable of delivering more than 300,000 kilos of flour per day. In a short time 300 mills were in operation to supply the capital. And at the same time it also rapidly increased our war material.

Since Colonel de Bange was in charge of the factory, the production was especially focused on war material.

And we know what favours the whole Bange artillery system received at once.

Even foreign powers were quick to place extremely large orders, to the great fury of the German factories.

The work carried out by the Cail factory is gigantic.

It manufactured the framework of the Pont de l'Europe, among other things. And at the present Exhibition, it made the Mexican Pavilion, half of the great Gallery of Machines. Of course, it had contributed a great deal to the previous exhibitions in 1867 and 1878.

Inside its pavilion, this establishment presents the main miscellaneous machines it manufactures: a money press, a vacuum machine, a Crampton locomotive, another locomotive for local railways, a small narrow-gauge locomolive-tender for industrial, agricultural or tramway use, a continuous distilling apparatus, a hydraulic lift, a large battery of twelve beet diffusers, a battery for sugar refining, steam boats, evaporation apparatus.

Outside, near the door, is a Bange system locomotive, mounted on a wagon-truc, also Bange system. Then the artillery exhibition. Field forges, caissons and pieces of different calibres.

Finally, there are two 57-millimetre rapid-fire guns. One can be used as a field gun. The other, heavier one, is intended to fire at torpedo boats. The recoil force is absorbed by rubber washers. Aiming is facilitated by a stock fixed to the gun carriage. The manoeuvre is very easy and not at all tiring.

All these pieces without exception are of the Bange system. The small calibre pieces are made of a tube reinforced with rather short frets. This is sufficient for field equipment, or low-powered siege equipment. The maximum loads of powders, are of 4k500 and 9 kilos. Marine guns of equal calibre have double and triple charges. For the large calibres, colonel de Bange forms the barrel of a tube reinforced with short frets with biconical interior surface.