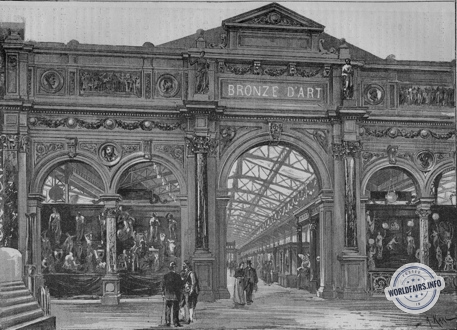 It is indisputable that the founders and art dealers have killed the art and taste of bronze. They have replaced art with reproduction reduced by mechanical processes, and fashion with taste, which is not absolutely the same thing.

There is no salon, no antechamber that does not want to have its bronze. A bronze, which copies this or that famous piece and which gives the illusion of art, as the novels of the Petit Journal give the illusion of literature. This invasion of bronze, of the small bronze, brought within the reach of modest luxury, by zinc bronzes, plaster bronzes and papier-mâché bronzes, has done more harm to sculpture than ten centuries of barbarism. Certainly the Venus of Milo, if she ever had arms, must be less irritated at the vandal who made her one-armed than at the industrialists who every day reduce her, cut her up, detail her and adapt her to the needs of their clientele. I have seen a Venus de Milo dressed up for boarding schools.

And unfortunately, after that one, there is no need to pull the string, because every day they make stronger ones. There is no work of art on which the reproduction with its inseparable companion, the Collas reduction, does not put its mercantile grid. And once the mould has been built, it works like the assignats board did in the past.

We have in class 25 the products of this miraculous fecundity. Well, let us declare at once that there is little torment comparable to that experienced by a man endowed with a few atoms of artistic sense, who is led by the misfortune of his destiny to spend a few hours in class 25.

And yet, it must also be said at once, this exhibition is outstanding. Our great founders have presented ravishing things, highly proclaimed objets d'art, unquestionable masterpieces; but it is the principle of the institution itself that is disastrous, a principle that consists in lining up three hundred copies of the same bronze, decreasing from centimetre to centimetre, from the model for the public square to the subject of a clock.

We will therefore leave this whole series of reproductions behind and, having noted the importance and value of this exhibition, confine ourselves to the three nails of class 25.

One is the Barbedienne clock. It could rightly be included in the watchmaking section, but it also has a place in the bronze section. It is a real edifice, where this accessory, the clock, is framed by much more important motifs. Its yellow copper colour gives it a vague tabernacle appearance, which is completed by the very religious setting in which it is presented. All in all a superb piece.

The second nail is all the more deserving of the name because it is made of wrought iron, which is quite appropriate for a nail, but which does not explain its placement in the middle of the bronze. The truth is that one would not have known where to place this fountain, in the gothic style imitated from the flowery coping stones that the Middle Ages placed above their wells. It is seven or eight metres high, this fountain, and is entirely executed with a hammer; either as forge work or as repoussé, it is one of the most beautiful pieces of iron that one can see.

Finally, the third nail is a vase, and a bronze vase; but this one consoles us for all the basins we have seen in repeated copies, for it is in every respect an original work.

Have you noticed how stiff the final polishing work, with the chisel, the hammer, the file, all that licking which takes place when the work leaves the hands of the founder, gives the bronze? If this work is done by the artist, the result is still bearable; if it is done by industry, it takes away all life and all personality from the work. All the inferiority of our bronzes compared to the marvels of Japanese founders is due to this additional work that our most refined casting processes, such as lost-wax casting, cannot avoid.

A sculptor, very French despite his foreign-looking name, Mr. Ringel from Illzach, has succeeded in eliminating all this in the vase he exhibits, not as a masterpiece of artistic inspiration, but as a type of manufacture. As it stands, his vase comes out of the mould, it has not undergone any retouching, it has not suffered the affront of a chisel or a polisher. More fantastically, M. d'Illzach has moulded things without consistency, such as soft earth, velvet and I believe animals. For he has brought together in his vase the most disparate elements. And all this is rendered, all this lives and pulsates.

I have to tell you that our founders were a bit speechless. But I hope that they will learn from this lesson and that in the future they will serve us a little more living nature and a little less polished reproductions.