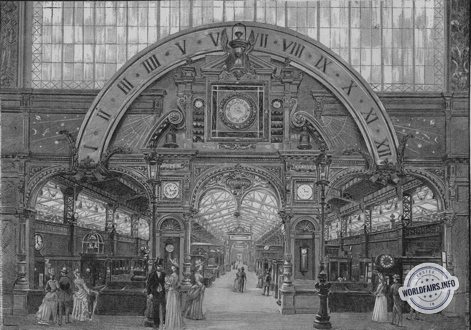 Placed next to the entrance to the art bronze, the door to the clock factory does not alter the impression of coldness, of déjà vu, that this one gave you. On the contrary, it increases it, with the aggravating circumstance that the criticism of it is much more justified, because it looks poor and its grey tint does not pay for this aspect of poverty with any illusion.

However, there is something rather original about it.

Above the three bays, a huge half-dial bearing the 42 hours, like the old Italian clocks that mark 24 hours, reveals behind it two fragments of a sundial.

In the two middle pilasters, niches have been made to place regulators, which would undoubtedly show off the regularity of the Palais-Royal cannon, but whose decorative effect is mediocre. They look like the clocks that are inlaid in the walls of the town halls in Paris, under the name of time centres for the unification of time.

There are dials here and there. But as the door is a collective property of the exhibitors, no jealousy was intended by placing dials from this or that house, and these are simply painted on the facade - like the fake clock which, in the salon décor of provincial theatres, is painted on the fake mirror.

If at the clock exhibition one has only illusions of a clock from the first step one takes, where will one have to go, good God! to find real clocks!

This section opens onto the large central gallery, through a door we have already mentioned.

To the right and left, we first see the work of the students of the watchmaking schools and a rather interesting exhibition of the history of watches since 1770. But, is it really wise to show all these old watches, which are very beautiful, really? And are the new watches, the watches of progress, worth our old watches? They were heavier, but at least they worked steadily for many years, and, strangely enough, if this watch that was fine simply got dirty, it was sent to the watchmaker; but when you came back from the modern specialist, chances are that the watch will never work again except in a very irregular way. The watch, like the beautiful woman, has its nerves, and sometimes nothing can be done with it, and as for the completely modern watches, they often forget to work. So the modern watchmaker, in general, does not know how to make old watches work, and the watches he makes are far from being irreproachable; so I think I was right in saying that this retrospective exhibition of watches is rather dangerous. However, it must be admitted that watches have come down in price, that is the only progress they have made, the common watches, of course, for chronometers are at heights of price, inaccessible to many purses.

As for the clocks, we see a reconstruction of the old clepsydras, this comparison is much less disadvantageous than for the retrospective history of watches. Moreover, the clocks work more regularly, their mechanism, more manageable, allowing them to be regulated fairly well.

The principle of the ancient clepsydra is as follows: "Equal quantities of liquid flow out of a vase in equal times, when the height of the water is kept constant. Time was therefore measured by examining the volume of water that flowed out of a vessel in a given time.
The discovery of the oscillations of the pendulum by Galileo in 1582, and especially of the isochronism of its oscillations, and later, in 1657, the invention of the spiral spring by Christian Huyghens, led to complete changes in the construction of time-measuring devices. Indeed, the spiral spring, the regulator and the escapement alone sum up the mechanical means, the basis of all watchmaking.

What has disappeared from the current exhibition are the globe clocks with bronze or gold-plated zinc subjects. We no longer see sheep, shepherds and shepherdesses, Paul and Virginia, Jean Bart, Constable Du Gués-clin, in short the whole series of popular heroes, all of which have been replaced by more modern subjects, which easily have a higher artistic value. And then, fashion has changed; a colossal bronze subject is now placed on a relatively small clock, the time is only the accessory, the main and interesting piece is the subject.

There are also clocks whose movement represents machines in motion: a locomotive with all the wheels turning, a fixed steam engine, the large flywheel turns as well as the parts of the piston, a water mill, a windmill. But all these mechanisms must be extremely sensitive, to disturb themselves, for they rarely work and never for very long; however, a clock is made to work for a certain number of years, day and night, it is probable that all these machines could not provide a very long run.

There are also the watch-wallet and music boxes, which are also very carefully looked after; they are made to run for the shortest time and least often. These are still very delicate movements.

What is completely new is the automatic ten cent cabaret. You put a large penny in this or that tent, and you get a redcurrant syrup, a punch, an American, a vermouth, and so on. But this device does not work at all. However, there are some in Paris that work quite regularly.

Then there are the alarm clocks; light and electric light, you wake up and you have a little sun in your room.

We also see songbirds, which don't work either.

In some new clocks, the dial is removed, the time is indicated in figures, the hour above, the minutes below. This is very nineteenth century. There are similar watches.

There are also all possible mantelpieces. From the point of view of taste, the exhibition is quite nice. However, the dominant feature is, with a few exceptions, cheapness. Thus, for nine francs, you can have a winding watch, guaranteed for two years, in nickel, and, for twenty francs, a winding watch in silver, with rubies, guaranteed for five years. This is obviously progress, and, although so cheap, these watches do not work badly at all. Soon watchmakers will be distributing prospectus watches in the streets for their various articles.

We can admire monumental clocks; but there again, nothing extraordinary. What marvels were not produced by clock artists in the past in our cathedrals? Some clocks, in addition to the time, bear a perpetual calendar with mobile feasts; a planetary calendar, showing the duration of the revolutions of each of the planets visible to the naked eye, the phases of the moon, the eclipses of the sun and moon, the precession of the equinoxes, etc. In addition to this, mechanical statuettes strike the hours and half-hours with perfect regularity, and what makes the price and inestimable value of these works is the precision of the astronomical indications. Could the same be said of all the clocks on display? Fortunately, the cannon of the Eiffel Tower is the law for the closing, because if we had to stick to the indications of the clocks, there would be continual discussions between the visitors and the guards. Listen to how well all these bells are rung one after the other; it seems that each clock wants to give way to its neighbour, it is an assault of politeness: who will ring the last one, and when you think that all this noise is over, you jump: it is a big sleeping bell which suddenly wakes up to arrive last. Really, if all these clocks are incapable of working regularly for several days in a row, the exhibitors should at least set them all together, every day, to the Observatory time, even for their own benefit.