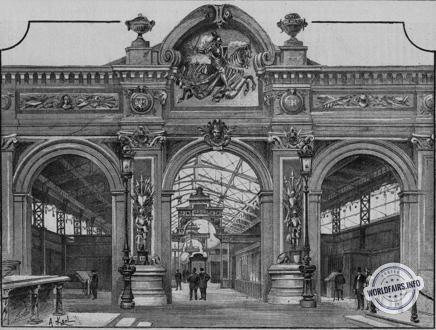 Neighbouring the drapery, whose door is so beautiful, class 38, which includes small arms and hunting weapons, has wisely understood that it had only to eclipse such an opulent neighbour.

Its terracotta-coloured facade is therefore only noticeable for its simplicity, which borders on, and sometimes exceeds, absolute nakedness.

All that stands out on this facade, on which the brick tones mingle sadly with the faded blue, are three pedestals on which are perched armours.

There are also, here and there, panoplies, which is quite natural for an exhibition of weapons. Nevertheless, to break this lack of ornamentation, a horseman has been placed on the pediment of the central bay, whose time and nationality it would be difficult to determine.

He is iron-bound like a Rhine burgrave, covered in cloth like an Arab and colourful like an Italian pifferaro. His horse being launched at full gallop, I am inclined to believe that he is an Arab, since the Moors go fast.

From the lack of importance of this section, we can see that it is only of interest to peaceful people, bellicose only when it comes to the hare or the partridge. Indeed, we can hardly see anything but hunting rifles, swords, foils and pocket revolvers. It would seem that we should see a quantity of completely new models, because, for weapons of war, how many different systems are not constantly proposed, while there, there is no need to make anything new that is cheap, the hunters, I mean the real ones, would do well to economise, if necessary, on their food all year round, in order to procure the desired weapon. But it is much more productive to have a new rifle system adopted by a government that takes several thousand at a time. So the minds of the inventors are all on weapons of war.

However, there are some new models which seem to be really in progress, as well by construction, convenience, as by their real cheapness. One of our great French manufactures exhibits a two-shot hammerless rifle, which is self-loading, whose triggers are concealed and safe from all foreign contact, and which has no connection with the Hammerless system. This elegant and rather light weapon has been a huge success. The labels announce nine hundred purchasers at the Exhibition.

There is also a pocket revolver, flat as a wallet, which looks very advantageous.

What is also interesting is the construction of the rifle barrels. There are about twelve successive operations, which partly explains the high price of some guns.

Thus, to make a Damascus gun, one takes a bundle of square steel rods, formed of sixty-four of these rods, one passes it to the rolling mill, so as to obtain a rod made up of the first sixty-four and having no more thickness than the primitive rods. This rod is then twisted on itself. Several similar rods can then be welded together, flattened and wound around a steel cylinder, forged and hammered, so as to obtain a very homogeneous barrel, which only needs to be finished, which is still very long.

Bernard barrels are made in a similar way, but instead of starting with square rods, we start with flat rods about three to four centimetres wide, while the square rods for damascus are about one centimetre square. About twenty of these flat rods are joined together, the other operations remain similar.

In the middle of the gallery there are cannons, but these are not dangerous, they have a smooth bore, an indication of unwarlike intentions for a weapon of this kind, a murderous cannon has a rifled bore. These are the cannons intended to announce that the party is starting. Many provincial municipalities have offered themselves this luxury, and, according to budgetary resources, one chooses the large, the small or the medium ones.

There is the cannon of the Eiffel Tower, a superb small copper cannon, then the cannons for yachts, which are generally also made of copper; they are no longer weapons, they are ornamental bronzes, and if only they could be put on the fireplace.

Finally, in the special showcases, are exhibited all the war powders and cartridges of all the countries of the world, invented in recent times. What will it be like in the next war? There will be no one left on the field on either side, unless each side keeps a respectful distance, because with the new ranges of the rifles, it will be necessary to think of adding a telescope to the side of the rifle, in order to be able to see the enemy, new difficulties being thus created, the result may not be more terrible, it is moreover the only means of suppressing wars one day, because there will come a time, when by dint of improvements, they will become impossible.