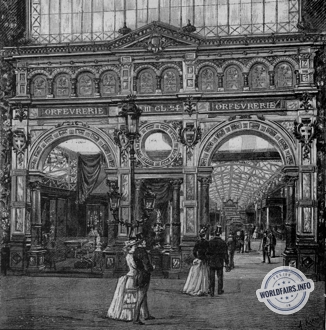 However rich it may be, the monumental entrance to class 24 (goldsmiths) is one of those banal façades like those of bronze and watchmaking.

But here, let us be clear, I do not mean that these façades are of no value, on the contrary, they would look good in many places; but here, in the midst of the excellent things gathered in a space that is, all in all, limited, what is only good is likely to appear mediocre.

Thus, this entrance lacks character, although it was thought necessary, in order to break the uniformity, to widen the two bays on the left and right at the expense of the central bay, which is now only a false entrance occupied by a white marble vase, or one playing the white marble.

Short blue columns with gold cladding at the base and equally gold capitals support the round arches of the bays. There is much, much gold in all of this and yet it is far from giving rise to any idea of wealth, quite the contrary. There are also details that have been executed with great carelessness. For example, the escutcheons which depict the old arms of the silversmiths above each opening are executed as crudely as possible, and already they are blistering and will crumble and fall off.

The same observation can be made for the gilding of the cornice, but here it is more serious and above all more counter-intuitive, for if gold is a chimera, it was not in the interest of the silversmiths to prove it to us.

Goldsmithing has a long history of nobility in France. - It proudly claims to be the work of the good Saint Éloi who, after having seated his monarch Dagobert on a throne of solid gold, gave him - probably in order to keep him there, despite the political storms of the time - advice of such harsh frankness.

This Saint Eloi was, in fact, a goldsmith; he worked with the same hammer and on the same anvil, and near the same forge, from which his assistant Oculi drew the bellows, the horseshoes and the crowns of the good King Dagobert, and perhaps he would be astonished if he saw the path that the profession he honoured has taken, from the rough Merovingian goldsmiths to the table tops of Christofle.

He would in any case be happy and proud, after passing through the large blue and gold columned doorway which, from the thirty-metre gallery, leads into the goldsmith's shop, to see how gallantly his successors have installed their works in light galleries whose columns support green hangings.

Goldsmiths' and silversmiths' work can be divided - roughly speaking - into three main parts:
Domestic silverware, decorative silverware, religious silverware. The three parts are largely represented by old houses which have been the glory of French industry and art for years.
Domestic silverware, tableware, cutlery, etc., is by far the least interesting. Flatware has long since fallen out of fashion, and for good reason, and electrochemical processes have brought silverware so far into the realm of industrial production that it has lost all its artistic cachet, which is the case with real silverware.

Table tops are as much decorative silverware as they are domestic silverware, since they decorate beautifully and serve no purpose at all. There are some magnificent ones, including one in the style of Louis XIV, which looks absolutely royal.

Toiletries - which are very domestic - are made only for export. It is a rather gaudy luxury which displeases our French women - at least those with taste. It is true that they all have taste.

Ornamental silverware is, by its very value, somewhat confined to the trinket: it is not within the reach of the general public to acquire pieces of importance as was produced during the Renaissance, boxes without a purpose, sconces without a goal, only decorative. We are in the midst of the reign of the cream pot, which is only on the shelf, of the tea set, which is placed prominently, but into which one carefully avoids pouring a drop of liquid. The statuettes are also very well worn; here is a Semeur which has real allure and a Bacchante which would be perfect, were it not for a little mawkishness. At other times, the goldsmith's art is merely the setting for an object of art, as with this ravishing statuette of Mercié, which stands out on an admirable silver canvas.

As for style, the rococo triumphs, everything is volute, small branches, varied foliage, ornaments in profusion; too many ornaments even. One can also blame the abuse of black and oxidised silver, which brings out the delicacy of the chiselling, but which gives a false patina, not to the taste of the truly delicate.

Even more than the details, the ornaments have remained pure Louis XV. One should not complain about this, for it is a truly French style, cheerful, warm, shimmering; what the hell, goldsmithing cannot arouse such majestic ideas that one is saddened by them.

The style of the 19th century is hardly to be found anywhere else than in the objets d'art intended to be given as prizes in competitions, and of which Christofle exhibits an important collection. Mercié, Coutan, Delaplanche, are the usual suppliers of this silverware, a little banal in its reproductions, but whose originals denote a conscientious study of nature; there are reapers, haymakers, farm girls who are truly inspired by an astonishing search for the real thing.

But the most interesting part of this section is undoubtedly religious goldsmithing. It had its renaissance in this century. Under the vigorous impulse of the artistic doctrines of the master Viollet-le-Duc, it abandoned all that it had, by degeneration, acquired of mawkish and contrived, to return to pure architectural conceptions, translated by an art arrived at its maximum of productive means. The altars intended for the churches of Rouen, the high altar of Mierville are true masterpieces, monuments of art that recall the best periods of religious goldsmithing.

Alongside this, the worship accessories are no less admirable, and we should mention several monstrances of superb workmanship and an episcopal armchair, a faldistorium intended for the archbishop of Sens and which was executed according to drawings by Viollet-le-Duc.
The masters of painting now provide the enamellers with cartons, and patient research has brought them back into possession of recipes and techniques that have been lost for centuries.


It is necessary to mention in passing pewter goldsmithing. This metal with its soft tones, so malleable, so suitable for all sorts of uses, has provided some charming pieces of crockery. Unfortunately, this is a revival that has little chance of success. Goldsmithing pewter seems to be as dead as truly chiselled iron, of which there are some very attractive samples.


Goldsmithing has always been an art of many tricks and bizarre masterpieces; so it is not surprising to find a few curiosities here; we will mention two.

One is a silver reproduction of the Paris Bourse at 275. It seems that on closer inspection, not a single detail is missing. Around this Greek temple in metal are placed 64 street lamps whose lanterns measure about two millimetres in height. It seems that these 64 lanterns were supposed to light up. However, as no gas was installed in the gallery, we were deprived of this spectacle.


The other curiosity is the work of Mr. Dufresne Saint-Léon, an erudite, if slightly fanciful, artist who has restored some very interesting pieces of medieval goldsmithery. His masterpiece is called The Crowns. It is a huge bowl around which, on different levels, are grouped energetic figures; Latin legends shed a dim light on this dishevelled but truly artistic composition. There is the ambition that devours Caesar, the vengeance that intoxicates Attila, the avarice that gnaws at Croesus. All these philosophical expressions are represented by wild cavales that unrestrainedly drag the said characters along, while at the top Saint Thecla rests in her glorious purity and in peace.

It is highly symbolic, but very beautiful.