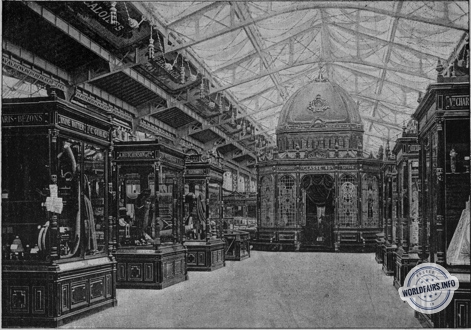 In the second gallery on the right, going through the 30 metre gallery from the Palais des Machines to the central dome, is class 45, chemicals, which occupies a large space between hunting and gathering, which begins the gallery, and leather and bodywork, which ends it.

Chemical products! The term is a little vague, now that industrial chemistry has got its nose everywhere and that there is hardly any production of human activity that is not a little within its competence. On the other side of the Exhibition, in the Liberal Arts, you can see the laboratory of the chemist Michel Maïer, half sorcerer, half populariser. Here you will find what his descendants are making, for this Michel Maïer was truly an ancestor. However, he only intended to popularise science, modern industry has popularised application. The dyer, the soap maker, the candlestick maker, the apothecary of yesteryear, chemists; all chemists today, and this is only just beginning.

These professions are also grateful. Look at the candle makers, for example. They have reproduced in every aspect: bust, profile, three-quarter view, but always in stearin, the illustrious Chevreul to whom, between us, they owe a beautiful candle: the candle, whether from the Étoile or elsewhere, has arrived, since Chevreul and simply by applying the discoveries of the centenary scientist, at its maximum perfection. We have even gone too far, the candle no longer containing any fatty substance no longer burns, or rather burns and does not light.

I must warn you that my friend does not like chemistry.
The stearin candle, as invented by Chevreul, has only a limited time left to live. It is threatened by the candle extracted from oil or tar.

Oh, tar, what an inexhaustible source for chemicals! From one end of the gallery to the other, class 45 is full of tar products, by-products and after-products. In the countryside, we say, with all due respect: "Everything in pork is good", tar is the pig of chemistry, everything that comes from it is used and reused. Fifty years ago, gasworks paid to be rid of this black and dirty pitch. Today they make enough profit from it that the gas no longer costs them anything to produce, which does not prevent them from selling it at a high price.

Do you want to see what they extract from the pitch? Let's have a look around this gallery. Among the pharmaceutical products, here are a lot of salts with barbaric names that have benzine or other tar extracts as their base. One of the most famous is saccharin, the industrial manufacture of which is forbidden in France, and which sweetens five or six hundred times as much as its weight of cane sugar.

Another is antipyrine, a German product which stops the most severe neuralgic pains and replaces quinine for the treatment of fever. Another, ah! I don't know what it's for, it's Vacétylphényl-hydrozone. A nice name.

Then there is the series of all the disinfectants, of all the antiputrides, of which phenol and creosote form the basis.

The pharmaceutical exhibition is not very varied in appearance. However, here are some gigantic rolls that break the monotony of the decor and attract attention.

They are amplastic tissues exhibited by M. Jouisse, a pharmacist from Orléans, who was for a long time an intern in the hospitals of Paris.

These rolls, of Eiffelian height, show us that this company can manufacture considerable quantities of vesicant cloths, thapsia, diachylon and others, and thus meet the numerous demands of export.

Further on, fatty substances are extracted from tar. I have mentioned candles. Here are black and white soaps; Vaseline, which comes from petroleum, but which tar replaces with a similar product.

And this is finally the triumph of tar. The colours, the radiant range of aniline, fuschin, eosin, erythro-sine, chysoline, various blues, Victoria green, Paris violet, the whole rainbow sleeping in that black lump of coal which falls under the miner's pick.

Is that all? Not yet. Here with the nitrobenzine is the whole range of perfumes and bouquets. Then alcohols, and then what else? Not long ago, I was shown and drank some wine, Bordeaux, whose formula was as follows: water, fuschine for the colour, acetic acid for the bite, acetic alcohol for the amount, nitrobenzine for the aroma. This wine was good, it was excellent, it came from a gas factory which treats the by-products of tar, 'and very seriously the winemaker said to me:
"I do what nature does. A little faster, that's all. But what I put in my wine is what she puts in hers. "
What was the answer?
I have forgotten, among the fats that can be extracted from tar, margarine which, according to its inventors, is much better than Isigny butter.

Colours not extracted from tar, however, continue to struggle, but they are in visible decline, so they are only lightly represented. Oxides for paint and ceramics, wood dyes for fabrics, and that's all. This is because the range of these colours is limited for each product, whereas aniline provides all the shades. Ultramarine, however, is not weakening; it represents a very French speciality and is not about to drop its pavilion.


Inks, waxes and polishes are chemical products that are in common use. The ink of yesteryear, Petite Vertu or otherwise, was made of gall-nut and an iron salt, the shoe polish must have had about the same composition, plus a fatty substance, and the wax came from bees. Today, there are a hundred formulas for ink, a thousand formulas for shoe polish, and the whole of chemistry would be outraged if one dared to speak of bees in connection with honey. This explains why there can be competition for these products, which are widely, too widely, represented at the Exhibition.

Nevertheless, they do not harm the rubber site, which is very large. It is true that the uses of rubber are multiplying day by day. Today it is used in clothing, footwear and industrial parts. The most important progress has been made in this last area.

The whole exhibition is very well set up in black and gold showcases, in the middle of which stands a superb kiosk, also black and gold, which the exhibitors have reserved for themselves. Few installations are so richly laid out. But it must also be said that the exhibitors represent, for the most part, the oldest and most important houses in France.

The drugstore, which is a branch of the chemical industry, if not its mainstay, has long been one of the important businesses in Paris. To be sure of this, it is sufficient to look at the shops in the Rue des Lombards and the surrounding area, and you will see how many of these houses have been in existence for 100 or 150 years.