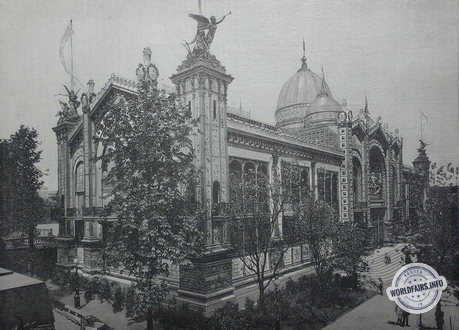 For some years now, the Argentine Republic has been in fashion. There is nothing but talk of Buenos Aires, of the prosperity of Buenos Aires, of emigration to Buenos Aires. Throughout Europe, governments have been forced to deal seriously with this universal emigration, which is becoming frightening. Buenos-Ayres, that is to say the great Argentine Republic, is the land of gold, of fast business, of quickly won wealth. It is undoubtedly in order to prove that this reputation is legitimate, that the Argentine country has raised a superb pavilion at the foot of the Eiffel Tower, not far from Brazil and Mexico. You can see a large sun crowning the building from a distance. It is there. In a truly republican country, the Argentine Republic is officially competing. It has spent more than any other American nation. Its pavilion cost one million two hundred thousand francs, and the luxury displayed there will attract the French and foreigners in droves. Of all the American pavilions, that of the Argentine Republic is, with that of Mexico, the most important. In order to prove its friendship for France, this rich country was not content to erect a sumptuous building, its Committee asked our best artists to paint the domes, the panels, the galleries. Renowned French painters and sculptors contributed to the ornamentation: Gervex, Besnard, T. Robert-Fleury, Cormon, Saint-Pierre, Merson, Barrias, Favre, Duffer, Chancel, Paris, Montenard, Duez, Toché, Jules Lefebvre, Leroux, Roll, Tureau, Hugues, Pépin, Ch. The earthenware is by Parvillée, the terracotta by Lœbnitz, the stoneware by Muller, the mosaics by Facchina. As you can see, we are dealing with a republican country that does things in a princely manner.

It is Mr. A. Ballu, the architect whose name dispenses with all praise, who made the Argentine Pavilion.

Instead of reproducing monuments as he did in the Algerian section, and in the absence of a characteristic architecture in the style of the Mexican Pavilion, Mr. Ballu boldly embarked on all the innovations that his imagination suggested to him. He was so successful that he claims to have been plagiarized in other installations not far from this one, and he had the President of the Committee for the Artistic Protection of Works of Art take note of the double plagiarism.

The Argentine Pavilion covers an area of 1,600 square metres on the ground floor and 1,400 on the first floor. It is made entirely of iron and cast iron, and can be dismantled and rebuilt in Buenos Aires.

A large iron and wood staircase fills the entrance axis. Around the monument - for it is a real monument - runs a large gallery on the first floor. A huge dome, flanked by four smaller ones, crowns the building. All the outer glass domes are lit by electric light. More than nine hundred points of light will give this palace a fairy-tale appearance every evening.

M. Ballu wanted to remind us everywhere of the wealth of the Argentine Republic. There are only precious stones and earthenware set in terracotta, stained glass windows of an absolutely new system, used in mosaics, decorative sculptures crowning the four corner pylons, the main entrance and adorning the pendentives of the great dome inside. It is here, and also in the interior of the four small domes, that the great French artists have put their signature.

The whole pavilion is covered with earthenware, porcelain, glazed mosaics, enamelled stoneware, applied glass and first-class stone. In a word, luxury everywhere. The good taste of the architect has delicately displayed the wealth of this country in an absolutely original pavilion.

The list of products and things to study that the Argentine Republic exhibits would be very long. Determined to be noticed, in the good sense of the word, this country sends us a host of exhibitors who are all able to do a great deal. The Argentine Republic produces cotton, sugar, tea, maté, tobacco, cocoa, coffee, etc. Its rare trees and plants are innumerable, and the country has a large number of exhibitors. Its trees and rare plants are innumerable, so that in this pavilion one will find all kinds of plants very worthy of observation.

The principal wealth of the country consists in its immense pastures, and its colossal export of cattle is famous. Its meats, its meat extracts, everything that is meat in Buenos-Ayres is absolutely remarkable.

One of the most curious things about the installation is the great refrigerating machine for preserving fresh meat indefinitely without any alteration. Connoisseurs will also find magnificent samples of wool, leather, cotton, saddlery and, above all, canned food. All this explains the emigration fever to Buenos Aires that has seized a large number of inhabitants of our old Europe, a fever that has become a monomania in France, Italy and Spain. The exhibition of the Argentine Republic is not only a great artistic monument, but a kind of summary of the wonders of this country. It will certainly turn many heads and increase the number of emigrants who, faced with all this wealth, will no longer hesitate to undertake the long journey.