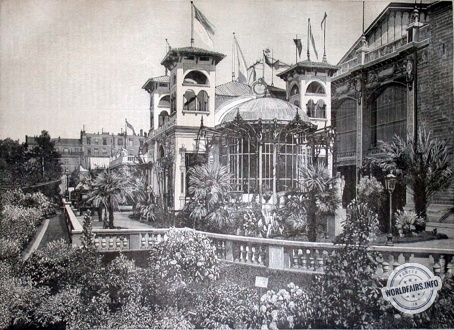 The small principality of Monaco, so rightly called the paradise of Europe, also wanted to take part in the great commercial struggle of the Champ de Mars. It naturally occupies a small place in it, but it occupies it very honourably.

There were no credits officially granted to Monaco; but the Société des Bains, on the one hand, and several private companies on the other hand, provided credits high enough to allow the construction of the very elegant Pavilion of the Principality of Monaco. This pavilion, which covers an area of 300 square metres, stands to the left of the Eiffel Tower, not far from the Folies-Parisiennes theatre. It is an elegant Italian style building, cheerfully coloured in red and white, which does the architect, Mr. Janty, great credit. The four turrets, which surmount the roof, the terrace on which the base rises, everything reminds the visitor of the land of the sun. This impression is further enhanced by the palm trees, the succulents, in a word, by the whole floral display of the Principality which spreads around the building. The medallions and terracotta tiles that decorate the interior and the façades are also products of Monegasque industry. The same applies to the basins in front of the greenhouse, which are exhibited by the Société industrielle et artistique de Monaco.

Inside the pavilion, there are 36 exhibitors whose products are divided into 27 classes. The main ones are perfumery products (colognes and iris waters), pharmaceutical products (eucalyptus and carob syrups) and numerous samples of horticulture and arboriculture. Then, after the pottery and decorative earthenware, which are truly very special, we come to the exhibition of Prince Albert of Monaco, which is not only the highlight of the Monegasque exhibition, but certainly one of the most curious things at the Exhibition. The hereditary prince of Monaco is, as we know, a most distinguished explorer. The account of his explorations was published by him in the Revue des Deux Mondes, and the way in which the Prince was able to fix the route travelled by the Gulf Stream is one of the beautiful scientific works of our time.

Prince Albert's exhibition in the Monaco pavilion includes a collection of underwater plants, the result of his research at the bottom of the sea around the Azores; there are also some fabulous fish, shrimps one metre long, which can be seen next to the devices and instruments that were used to bring them to light. We are convinced that this collection will be of interest to the general public as much as it has been to the learned public. And we will leave the pavilion of Monaco convinced that the Principality will only increase its industrial and commercial resources in the future, which are in full development.