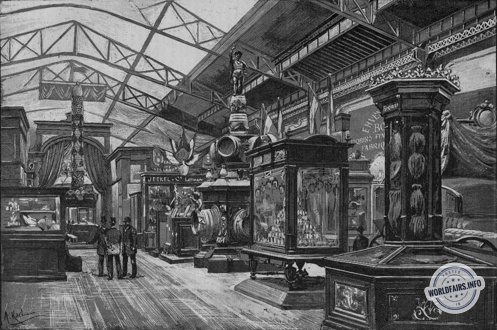 Holland did not receive any subsidy from the government to be represented at the Paris Exhibition, but it is understandable that this country, so industrial and so commercial, wanted to have its place at the international competition of 1889.

Several industrial notabilities therefore put themselves at the head of a commission which helped with its money the less wealthy exhibitors who wanted to send their products to the Champ de Mars.

Thus Holland was one of the nations that occupied the most sections. At the Champ de Mars, at the Invalides, Various Industries, Foodstuffs, Liberal Arts, Fine Arts, Architecture, she holds her own everywhere, not counting the Dutch colonies and the Indian village. It covers a total area of 8,500 square metres, and it is Mr. Edouard Niermans, architect, who has organised and installed the different parts of this important exhibition with a taste and science beyond all praise.

The Miscellaneous Industries section, located on the Avenue La Bourdonnais side, has its façade next to the Belgium section, on one of the large transverse galleries. This façade, built in the Dutch Renaissance style, consists of a large door and four symmetrical round-headed bays decorated with draperies. On either side of the door there are also round-arched niches in which magnificent Delft vases have been placed.

Holland has sent the products of its great industries to this place. The Royal Carpet Factory in Eventer is to be mentioned, which shows us some truly marvellous imitations of ancient carpets. These carpets, of a finished work and of a very rich design, are up to ten centimetres thick. Then there is the Delft factory, which is known throughout the world and which has an exhibition worthy of its reputation at the Champ de Mars. The bodywork is also represented in a remarkable way.

In the central aisle of the section, the Delft Fleschenfabrik has erected a tall column with bottles of various colours to a rather original effect. All of these products are displayed in a small, elegant hall.

But above all there is a very interesting exhibition of technical drawings, bridges, canals, harbour works, etc., which proves that the Dutch are not only a nation of merchants, but also a nation of distinguished engineers, and the bookshop exhibition, where one finds very well printed works of very careful execution, proves at the same time that this is a country of people who love to learn.

As we said above, Holland is not located in the Champ de Mars in one place. Mr. Edouard Niermans has built a very successful little house for the diamond cutter, to the left of the Eiffel Tower, and near the Folies-Parisiennes theatre. It is still built in the Dutch Renaissance style, with brick and natural stone. Above the windows one can see imitations of old Delft earthenware, and the wrought-iron ornaments are of very fine workmanship.

The first floor is occupied by the offices of the police station, and the ground floor by the diamond cutting shop.

In the middle showcase, which is also in the Renaissance style, more than 2 million diamonds are kept. Next to it are tables, where the stones are first cut and then roughly cut; the cutting is finished by grinding wheels placed around the table. These millstones are driven by a gas engine. An old grinding wheel, moved by foot, allows comparisons to be made and to see the progress made in diamond work. The cutting offices are connected by electric bells to the police stations, so as to have the most prompt help in case of fire. In a word, it is a model installation.

At the Quai d'Orsay is the agricultural and food products section, a model stable and bakery.

The Colonial Exhibition is located next to the Metropolitan Exhibition, in one of the corner pavilions. The entire interior of the pavilion is covered with Indian fabrics. In the middle is a trophy of musical instruments and weapons.

In one corner, arranged in a very curious way, is a tent filled with vases of precious materials. And all over the walls, in shelves, oddly shaped objects, richly inlaid weapons, which show the visitor least familiar with colonial things, the immense extent of the Dutch empire. And one really does not know what to admire most of the products on display, the work of the natives, or the colonizing talent of this small people who were able to form and maintain such an extensive colonial empire.