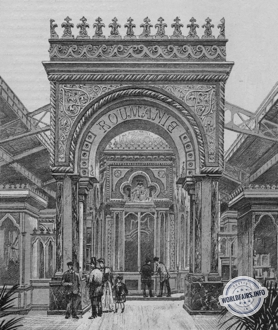 The history of Romania's participation in the Paris Exhibition is most curious. It shows all the sympathies of the Romanian people for France. When, in 1884, M. de Coutouly, Minister of France in Bucharest, asked M. Bratiano, who was then Prime Minister, to take part in the Exhibition, he was told: "We cannot take part in the Exhibition, not for political reasons, but for economic reasons. In the spring of 1888, Mr. Bratiano was replaced by Mr. Garp. M. de Coutouly went to see the new Prime Minister who replied: "We cannot take part in the Paris Exhibition, not for economic reasons, but for political reasons. It was therefore quite clear that the Romanian government was unwilling to take part.

It was at this point that the sympathies of the population were awakened by a Romanian living in Paris, Mr. Ciurcou, who showed an energy and courage in the organisation of the Romanian section that is beyond praise. He wrote an appeal to the Romanian population which was published in all the Romanian newspapers, formed an irresistible current of opinion, and a few days later a committee was founded in Bucharest, a committee composed of all the present ministers (for Mr. Carp had also been overthrown), and presided over by Prince Georges Bibesco, that chivalrous friend of France who, after having fought on the battlefield, also wanted to be in the good fight of peace and industry. It was these gentlemen who obtained from the Chambers and from private individuals the subscriptions whose amount we have given above, subscriptions which enabled Prince Bibesco and M. Ciurcou to organise the Romanian section, decorated by the care of M. Charles Lecœur, government architect.

Romania occupies 1,12b square metres. The commission would have needed a much larger space, but it was impossible to grant it. It was not believed that Romania, which is primarily an agricultural country, would be able to make such a large number of shipments.

It is true that it was not known that the commission would try to make an ethnographic and picturesque exhibition.

The façade of the section is reminiscent of the architecture and decorative arts of the country. The same character was given to the interior of the section: the façade, the doors, the side pavilions, and even the display cases are copied from Romanian churches. The largest of these windows, the one in the centre, is a reproduction of the dome of the famous Ardgesch cathedral.

The dominant feature of the Romanian exhibition is embroidery, as is the case in all the sections of the semi-Oriental countries. In the showcases of the Champ de Mars, there are Romanian embroideries that are truly beautiful, of a finesse and above all of an originality of design that strikes one with astonishment, when one knows that the embroideries, as well as the carpets, are woven without any model by peasant women who only have very primitive looms at their disposal. The carpets are said to be extraordinarily strong. It is not uncommon for a carpet to last for several generations. Among the embroideries, the exhibition of Mrs. de Lucesco deserves a special mention.

The objects in it took seven years to complete. It is true to say that Mrs. de Lucesco wove the fabric on which she embroidered herself.

In another corner of the section, some very curious national costumes, exhibited by the Furnica Society, placed under the patronage of the Queen, who is very keen to preserve the very picturesque national costume of Romania. She will have great difficulty in achieving this, judging by the numerous exhibitions of garments and hats, all of which are "like Paris", something of which the Romanians are very proud, and which distresses lovers of the picturesque. A little further on, very beautiful furs, exhibited by Mr. Prager, from Bucharest. Many leathers and even more boots and shoes, before arriving at the royal arsenal whose workshops are directed by a Frenchman, Mr. Angeli. Naturally, all the advanced weapons used in modern armies can be found here. A rather curious exhibition of ceramic products can be found next to a salt obelisk which reminds us of the richness of the soil in Romania. The kingdom is represented in all the sections of the agricultural exhibition at the Quai d'Orsay; wines, woods (among others, a walnut log of two metres in diameter, coming from the forests of General Floresco, President of the Romanian Senate) and finally, so as not to lengthen the enumeration, the exhibition of confectionery by Mr. Capsa, who is called Boissier's pupil. After that, there is no reason to doubt the sympathies that people in Romania have for France.

The Romanian committee also had the idea of having a chalet-restaurant built in the extension of the Rue du Caire, which is simply one of the marvels of the Exhibition.

It is an exact reproduction of the Romanian country house with its gable, tower and projecting roof. The whole was built by Mr. Oscar André, according to the data provided by Mr. Alexandre Ciurcou. The interior of the chalet corresponds to the exterior; one hears Romanian gypsies, which should not be confused with their Hungarian counterparts, as they are still natural, whereas travel has somewhat spoiled the Hungarian gypsies. One is served by real Romanian women, very pretty under their picturesque costumes.

They do not speak a word of French, which certifies that they are not from Batignolles. The food served in this chalet is naturally Romanian. The food served in this chalet is naturally Romanian, and many Romanian dishes are eaten here, including sour soup with borsch, which is also the favourite dish of the Russians, then fleica or Romanian beafteak, frigarui or grilled beef fillets on skewers, etc. As drinks, there is tzuica, which is plum brandy, and a wine that is very reminiscent of muscatel and is called tamaïosa. Lovers of exotic cuisine should go to the Romanian chalet; they will find plenty to satisfy their curiosity and will have a very pleasant time.