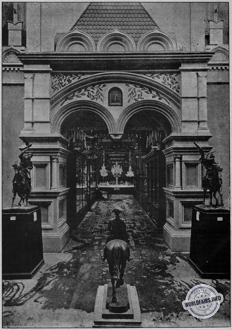 The Russian Government did not subsidise the Exhibition we see on the Champ de Mars, which is entirely due to private initiative; and if we could tell the story of the negotiations to which the organisation of this Exhibition gave rise, and the struggles which broke out between the various committees, we might perhaps interest the reader keenly, and revive struggles which are best forgotten. It does not matter, moreover, whether it was this or that committee that made the Exhibition: it is enough to note that Russia is taking part in the Exhibition, that it has 500 exhibitors, and that it covers a total area of 3,200 square metres.

The facade of the Russian section reproduces the most beautiful monuments of Byzantine architecture in Moscow.

The architect had the idea of reproducing the Kremlin wall: the windows of the Tehrem Palace, the towers of the Wassili-Lajenij Cathedral, the bell tower of Ivan the Terrible, the Sukareff Tower. One of the entrances is copied from the Kremlin gate, the other represents the main gate of Wassili.

The interior of the section is cheerfully decorated. Red and blue dominate. At the back of the room is a coat of arms depicting St George slaying the dragon. As Russia did not officially exhibit its national coat of arms, only the central motif was removed.

The 600 exhibitors in the Russian section are divided into 73 classes, so it is clear that it is not possible to list all the products sent. However, first of all, Russian goldsmiths, niello objects and imitations of Byzantine jewellery were very remarkable.

Then come the textile industries, printed shawls, cotton fabrics, all from Moscow; the silks show what enormous progress Russia has made in this branch.

Furs, leathers, mineral oils, naphtha oils, and above all petroleum, the exploitation of which has taken on such formidable development in southern Russia in recent years. It is from this part of the Tsar's empire that the numerous samples of tobacco that can be seen in the section also come.

Finally, drinks of all kinds: wines from the Crimea, where the vines are very well cultivated; wines from Hacheti; there are also many bottles of brandy, grain brandy, the vodka of the Russian peasant.

In the park, near the Eiffel Tower, there is a first annex of the Russian section: it is an isba, a peasant's house, in which Mr. Houtin had the excellent idea of installing twelve artists who paint icons, those images of sanctity so original that one finds in all Slavic houses, before the eyes of the public.

Then, in the history of the house, the Russian house built by Mr. Garnier is occupied by peasants engaged in what is known there as "bush industry"; it is small-scale rural industry. Thus we have before our eyes, at the Champ de Mars, a complete, though limited, picture of the industrial state of modern Russia.