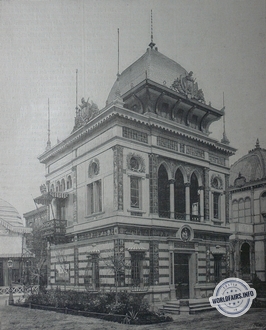 The republic of Salvador, which is one of the smallest but richest and most industrious of Central America, wished to be officially included in the Universal Exhibition.

The Salvador pavilion, installed with great care and taste by Mr. Pector, is situated on the terrace of the Palace of Liberal Arts. It is of an original architecture whose double Arab and Spanish character gives a rather precise idea of the constructions of the country. We surrounded ourselves with the best documents; and after long research, Mr. Pector, president of the American Society of France, having been able to find the signs of the sacred language (nohualt) which, according to tradition, were spoken by the ancient conquerors of Mexico and Central America, had the ingenious idea of having them reproduced, and of using them as decorative subjects for the pavilion.

Inside, several paintings reproduce some of the beautiful sites of El Salvador.

The main products of this exhibition are coffee, indigo, superb ores of copper, silver and gold, and wood species.

In a neighbouring annex, a beautiful collection of rare plants, which arrived a long time ago and have been well recovered, was exhibited, including a coffee plant which is no less than one and a half metres high.

Let us say, in conclusion, that the Republic of El Salvador is very flourishing; there is no country where public education is more developed, where the finances are in better condition (the government has no debts!). The population is about 71 inhabitants per square kilometre.