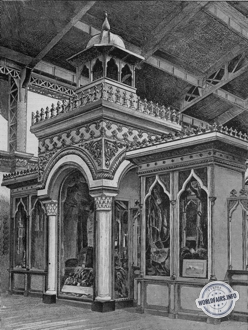 Switzerland's participation in the World Exhibition has no history. Everything went off without a hitch; as early as 1887, Switzerland's participation was assured. The Swiss government sent its official adhesion, and the Federal Chambers voted a subsidy of 450,000 francs. To this sum were added the credits voted by various cantons and cities to subsidise collective exhibitions. Thus the canton of Zurich voted funds for the silk exhibition. Geneva and Neufchâtel for watchmaking, St. Gallen for embroidery, the canton of Vaux for wine, etc. We can therefore see that there was general enthusiasm throughout Switzerland and that, with the exception of the ribbon industry, which refused, for whatever reason, to take part in the Exhibition, the Swiss section presented a more or less complete picture of the current commercial and industrial situation in the Helvetic Republic.

This section had 1,100 exhibitors, and occupied an area of more than 6,500 square metres. The Swiss section in 1878 occupied only 5,000 metres. These figures prove better than all the reasoning in the world the part taken by Switzerland in the Exhibition. We have already spoken of her Machinery Exhibition, where Switzerland had 128 exhibitors and showed the public the enormous progress made by her mechanical industry. All the products exhibited in the other groups are remarkable. We would especially like to draw attention to the collection of maps exhibited by the Federal Topographical Bureau. It seems absolutely impossible to go any further in cartography. Mr. Simon from Basel also exhibits a very curious relief of the Jung Frau. The school exhibition is also very interesting. It shows how much importance is given in Switzerland to all matters of education and hygiene. The watch exhibition alone covers 250 metres with 160 exhibitors. The exhibitors from Geneva and Neufchâtel in particular sent models that had never been seen before and managed to overcome the greatest mechanical difficulties. A very complete exhibition is also that of church ornaments and objects of worship. There are also stained glass windows. The glass industry, which seemed to have been forgotten in Switzerland for centuries, has been revived in recent years. Then we come to one of the most important sections: the collective exhibition of Zurich silks, which is contained in a superb showcase and in which cheap silks are mainly on display. Another important exhibition is that of lace and embroidery from Appenzell and St. Gallen, which occupies the pavilion next to the front of the section. The main attraction is the window curtains with very original and new arrangements.

Other important Swiss industries are also represented at the Champ de Mars. One will see, for example, milk, condensed milk and milk flour from Vevay. These huge factories absorb most of the milk from the canton of Vaux and send their products as far as America, where they are highly appreciated. Next to the Suchard chocolates, there is a large exhibition of Gruyère cheeses where you can see the most advanced products of this important industry.

In a Swiss restaurant situated on the inner perimeter of the garden of the Champ de Mars, one will be able to taste the wines of the Valais which are too little known outside of Switzerland, and when, in July, one will see the part taken by Switzerland in the cattle exhibition, one will be able to get an exact idea of the agricultural and industrial wealth of this valiant little country which has always been a friend of France and which has proved this feeling in times of misfortune. It will never be forgotten.