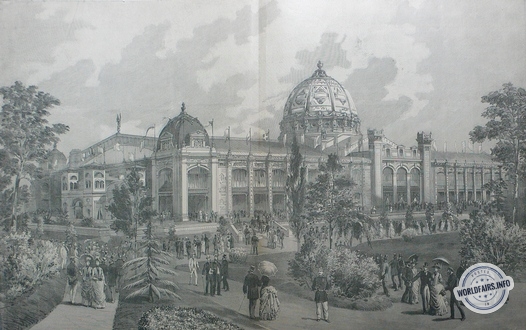 Since we are unable, for lack of space, to examine the main works (sculptures, paintings, drawings, watercolours, etc.) assembled in the Palais des Beaux-Arts, we would like to describe as briefly as possible the interior layout of this building, for the convenience of the reader and to avoid unnecessary searches through the meanders of Mr. Formigé's blue palace.

After having walked through the immense Rapp gallery, which will host the majority of the French sculpture, we enter on the right the part of the Palais reserved for our ten-year exhibition. On the ground floor, there is a series of small side salons with a most fortunate layout, for M. Antonin Proust, special commissioner for Fine Arts, decided that the works of each artist would be grouped together in a single panel, and would form as many individual exhibitions.

This arrangement was also adopted for pastel, watercolour, drawing and engraving, in the first floor gallery.

Then we arrive under the dome of the central dome, where this marvellous exhibition of the masterpieces of French art (painting, sculpture, engraving, drawings) from 1789 to 1878 is installed, which we will discuss again later. The whole part of the Palais, beyond the Retrospective Exhibition, that is, beyond the dome and the adjacent rooms, which will also be devoted to works of art belonging to the centennial period, belongs to the foreign sections.

Italy, Spain, England, Germany, Russia, Austria-Hungary are on the ground floor. Belgium, Switzerland, Greece, the United States, Denmark, Norway, Sweden, Holland, Serbia, Romania and the International (a section composed of the few countries that have not officially joined the Exhibition) are on the first floor.
We have calculated that if the glorious picture rail, on which the best of all these works will rest, were to be given a rectilinear direction, we would arrive at a length of about one and a quarter leagues. France alone has no less than 2,820 metres of picture rail. Foreigners have obtained 2,123 metres. The difference between these two figures belongs to the Retrospective Exhibition. This indication is sufficient to give an idea of the artistic production of the last ten years. We hope that with the help of this brief description, the visitor will be able to orientate himself easily in the midst of the thousands of works of art that populate Mr. Formigé's Palace.
Once this main excursion has been completed, he will still have an interesting walk to make through the French and international sculptures, a certain number of which have been, for lack of space (for sculptors are no less fertile than painters), scattered in other parts of the gardens and palaces.

In particular, we draw the visitor's attention to the retrospective exhibition of the Beaux-Arts, this superb display of all the masterpieces of painting, sculpture and engraving of the century, a vast synthesis of the history of art, customs, costumes and some of the political events of an entire period.

Let us express our regret that the principle which presided over the organisation of this splendid festival of French art has not been further generalised. Intelligently applied to all branches of human work, it would have enabled the scholars gathered in congress at the Champ de Mars to write on the spot, according to the documents gathered around them, a vast encyclopaedia from which future generations would have drawn valuable lessons and which would have prolonged through the centuries the memory of this splendid exhibition of 1889.

The organisation of the centennial exhibition of Fine Arts was probably not without its difficulties. Bringing together some sixteen hundred choice works (paintings, drawings, sculptures, engravings, etc.) was no easy task, without emptying our national galleries. However, only rare loans were made from museums. The special commissioner for Fine Arts turned mainly to private collections. If all the masterpieces of the century are not on display at the Champ de Mars, it is because some collectors did not feel they had to contribute to the splendour of this great celebration of national art. But all of them were asked, and with a few rare exceptions, all of them made it a sort of patriotic duty to collaborate in the organisation of the retrospective exhibition of Fine Arts, which contains no less than 650 paintings, 350 drawings, 200 sculptures and 400 engravings.

The organisers of the Centennial could not admit works signed before 1789, otherwise they would have profoundly altered the character of their programme. On the other hand, it was difficult not to include in the catalogue the names of those very French masters: Fragonard, Greuze, Moreau le jeune, who still signed some interesting works after the great revolutionary date. It was therefore decided that these artists would only be represented by a relatively small number of paintings and drawings, most of which were executed by hands already weakened by age.

As we said earlier, the entire part of the Palais des Beaux-Arts, located between the dome and the wide vestibule facing the Seine, is occupied, both on the ground floor and on the first floor, by the foreign sections.

Let us continue our walk in the methodical manner in which we began, examining first the works of painting exhibited on the ground floor by Austria-Hungary, Italy, Germany (which Mr. Tisza's sinister prophecies have decidedly not frightened to any great extent), Russia, Spain and England.

Then we will climb the left-hand staircase (Seine side), and visit successively, stopping in front of the main works, the Danish, Norwegian, Swedish, Dutch and Serbian sections, and the small international section. After this examination, we will retrace our steps and, after having walked through the long transverse gallery, occupied for the most part by the United States section, we will visit the Greek, Swiss and Belgian sections.
Despite its vast dimensions, the Rapp Gallery is unable to contain the works of contemporary sculpture executed in the last ten years. Most of this superb hall has been devoted to French sculpture, the rest to foreign sculpture. But nevertheless a veritable flood of works has spread, for lack of space, under the various vestibules, in the smallest corners of the Palais, and even in the gardens.

The remarkable works that caught our attention during our walk through this bronze and marble population are numerous and, let us say it with a very legitimate pride, the artistic genius of France asserts itself in an even more triumphant way than in painting.

Right next to the Palais des Beaux-Arts, in the part of the garden facing the Seine, are the two pavilions of the pastellists and the watercolourists, which we strongly urge art lovers to visit.