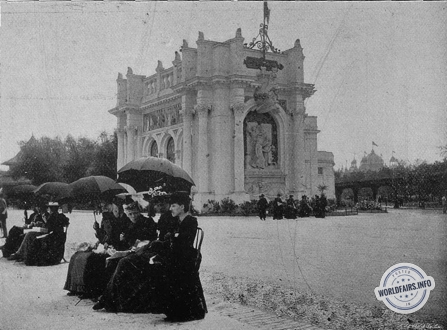 The French pavilion consists of buildings connected by a semicircular colonnade, in the centre of which, and in the courtyard thus made, is a beautiful fountain richly decorated with bronze statuary brought from France.

The pavilion is smaller on the south side, and contains the great hall of the city of Paris. It has been fitted out and decorated by the merchants of that city, the walls being covered with the finest tapestry, and the room containing only objets d'art and fine bric-a-brac.

The pavilion to the north contains a very large room, carefully decorated in staff, with ornamental ceiling and cornices. The panels between the pilasters and the walls contain some of the best photographs in France. The room in this pavilion is entitled "Lafayette", and it contains all the gifts, souvenirs, historical relics, and things of interest concerning Lafayette's relationship with that country.

The sketches of the building were made in France, and most of the staff models were made there and were sent here.
The exterior is in the French Renaissance style, also entirely in staff and elaborately decorated.

There is a very large group of statues on the north façade, and several historical paintings placed on the outside of the building.

The largest dimensions of the building are 76 by 54 metres, and it is only one floor high.

In addition to the exhibits already mentioned are models and plans of schools, prisons, hospitals and the sewage systems of Paris.

It is considered by many that this building contains more interest for Americans than any other foreign pavilion, because of the relics of the time when France was our old revolutionary ally.