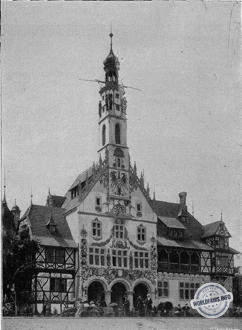 The German Pavilion occupies a prominent position on the lake shore in the south of Ceylon.

It is the most beautiful and expensive of all foreign buildings.

The plans were drawn by Johannes Radke, of Berlin, architect for the German government. The building is 24 metres high, and is crowned by a tower which is 46 metres high.

In the bell tower hang three huge steel bells. The building is a combination of several styles, but although contrasting the different parts do not lack harmony.

The centre is in the form of a chapel, rich in decoration. Window panes, projecting balconies and turrets give it a more picturesque appearance, closely resembling an old German town hall, as is still seen today in some of the old cities of the empire.

The steeply pitched roof is covered with bright glazed tiles imported from Germany. The corners of the roof, water jets, etc., up to the large lantern in front of the tower, are made of brass and bronze, but the interior of the building is even more beautiful than the exterior.

After passing through the beautifully decorated reception rotunda, to the left of the reception is the large reception room, and the office of the German Imperial Commissioner, Privy Councillor Adolf Wermuth, the second room is reached.

This one, in fact, is a separate wing almost 12 metres high and divided by a vaulted passage.

The pillars are heavy, short and solid throughout, and the arches are semi-circular, the style being early German Renaissance.
Balconies line the four sides of this vast interior space, the heavy wood and mouldings used in their construction richly painted and decorated.

The construction involved an expense of $250,000. In addition to being the focal point for German interests represented at the exhibition, there are also many important exhibits included here.

The German publishers make a comprehensive general display of their wares; the art of printing is, above all, well illustrated by a large assortment of beautifully bound volumes of all kinds, especially rare scientific works.

The second large group exhibition is placed in the chapel, and presents the art of the modern church. There are very fine coloured and painted windows, magnificent priestly vestments, expensive and artistic crockery for sacred use, beautiful illuminated missals and prayer books and bibles, and finally a collection of statues, crucifixes, etc.

The roof tiles, the antique furniture, the wooden ceilings, the beautiful carpets and rugs throughout the building were all made by German manufacturers and provide an exhibition in themselves.