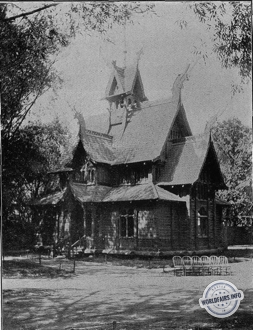 The Norwegian pavilion is just behind the Ceylon pavilion.

It is built on the model of the old "Stavkirk", a particularly Norwegian style of architecture dating back to the 12th century.

It is a curiously constructed cross-gabled building, the tops of which are decorated in a similar way to those with which the Normans of Lief Erikson's time used to embellish the bows of their sea-going ships. The building measures 18 by 8 metres and is constructed of Scots pine.

It was designed, built and assembled in Norway and then dismantled and shipped here and put in place by Norwegian workers.