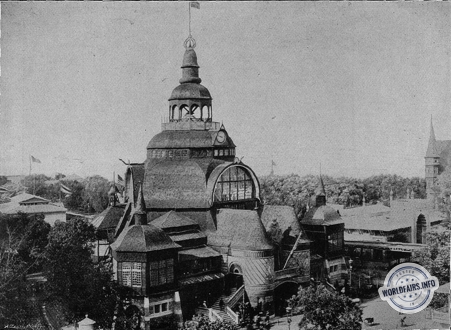 A large and pretentious pavilion, built at a total cost of $40,000, is Sweden's.

In the form of a triangle, to fit the plot of land allotted to it, this special pavilion was built.

The corner spaces of the structure each form a separate room of considerable size, while galleries run around the main building.

The main hall is hexagonal, and in addition to the dome directly above it, a bell tower has been built that reaches 45 metres high.

The building was constructed in Sweden, where it was temporarily assembled, then dismantled and shipped here for reassembly in Jackson Park.

The design of the pavilion is the product of the personal taste and imagination of the architect, Gustaf Wickman, of Stockholm, guided by the style of Swedish churches and houses from the 16th and 17th centuries, and as far as possible the characteristics of old Swedish architecture have been retained.

The materials used, brick, terracotta, cement and wood, were all donated by leading Swedish manufacturers and form part of the exhibition.

In the building are displayed magnificent exhibits of Sweden's iron mining industry, as well as other Swedish minerals.

Chinese products and glassware, gold and silverware, wood pulp and paper are also presented in a wide variety.

It also has an excellent representation of a real Swedish house, consisting of four rooms fully furnished and decorated according to Swedish customs.

The sports exhibition includes specimens of all the different means of transport used at different seasons and in different parts of the country, such as skates, snowshoes, skis, sledges, canoes, yachts, etc.

There are busts of most Swedish rulers, and exhibits illustrating the school system and gymnastics.