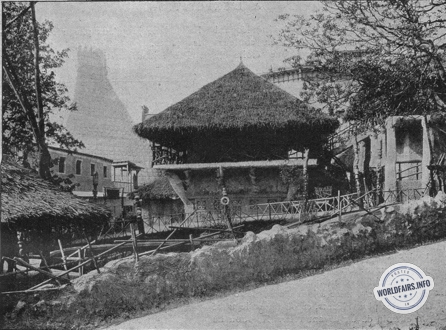 The Dahomey Exhibition is situated in the Trocadero gardens, on the Passy side, near the Syndicat de la Presse Coloniale, the Ivory Coast, Guinea and Senegal Pavilions, and has the appearance of a village, enclosed by a small wall made of cob and palm branches.

M. Brunet, the distinguished commissioner of the Colony, entrusted the execution of the Exhibition buildings to M. L. Siffert, a talented young architect, who has made marvellous use of the terrain, which is very steeply inclined towards the Seine, and has rendered the local colour with scrupulous accuracy.

The salmon pink colour given to the masonry is in imitation of the "terre de barre" used in Lower Dahomey for indigenous buildings.

The two main buildings erected in the centre are not, as the public generally believes, reproductions of Dahomean buildings, as monumental art does not yet exist in this country, but the importance of the colony demanded a representation in keeping with its size. He was inspired, down to the smallest details of the construction, by the documents brought back by travellers, jewellery, weapons, fabrics, sculptures, paintings, etc. The Dahomeans, singularly, have a very fertile imagination and, in spite of their barbarity, possess a very curious ornamental art: one can be convinced of this by entering the small museum organised at Trocadero.

The bas-reliefs and exterior sculptures of the main buildings of the village are exact reproductions of the decorative motifs of the Palaces of Cana, Abomey and Kotonou; the fetish posts scattered here and there in the garden come from the palaver room of King Toffa, at Bécon.

The large 20-metre high tower at the entrance, mistakenly called the Tower of Sacrifices by the public, is decorated with bizarre mouldings and bears King Toffa's coat of arms on all four sides (which are: Gules, a leopard passant, in front of a palm tree, in natural colours, on a chief of gold a star of sable).

In the small room that forms the entrance there are some seats for the king's representatives.
The doors are made of carpentry with naïve cut-outs and paintings; these doors are copies of those in the Palace of Abomey.

Then there are two large exhibition rooms where we can see, at the top of the walls, painted friezes due to the brush of Mr. Georges Garnier, who knew very well how to represent, in the style of the indigenous painters, hunting, fishing, war, the tamtam, the leaf market, the palaver, etc.

In the first and largest room, there is the ethnographic museum, which is abundantly furnished. First of all, we notice a very interesting map of Dahomey, measuring 3m5 x 2m, updated according to the most recent documents, and showing the route of the railway that is to link Kotonou to French Niger.

This line, for which studies are well advanced, should soon be implemented.

To the right and left of this map are various documents; the first engraved map of the "Kingdom of Dahome", drawn up by Robert Néris in 1790; then a reduced series of all the old maps from the first Dutch map to the most recent French editions.

Further on, statistics show the visitor how rapidly the commercial affairs of the colony have progressed since the French occupation and under the skilful administration of Governor M. V. Ballot.

The walls are lined with weapons of all kinds, ancient and modern objects, clothes, headdresses, masks, recades, etc., a large part of which, gathered in Porto-Novo by the care of Mr. Fonssagrives, administrator of the Colonies, is mixed with the private collections of General Dodds, Governor V. Ballot, the administrator Beurdeley, Mr Paul Daumont, Tovalou Quenum (a notable native), etc.


A series of seats of the kings who succeeded each other in Abomey from Dako-Donan to Ago-li-Agbo, successor of Behanzin. The most interesting is that of Agonglo, the seventh king, all covered in silver leaf.

A whole series of fetishes, some natural, others made of wood covered with copper and tin leaves, have been taken away for a few months, for the veneration of the faithful under the promise of returning them intact.

There is a fine collection of musical instruments, belonging to the Count of Osmoy, including two monster tam-tams, the male and the female.

In the flat display cases in the middle of this room there is an important collection of gold, silver, ivory and glass jewellery, made in Dahomey, some of which is the work of the jeweller O'bassa, one of the indigenous members of the troop detached to the Exhibition. Various luxury weapons, the travel headdress of Behanzin, made of tiger skin, the small boat hollowed out of a piece of wood which was thrown into the sea by the fetishists to sink the French fleet when it appeared in sight of the coast of Dahomey.

We will not leave this room without admiring the three bronze busts, the work of the statuary Charles Perron, which reproduce, with great resemblance, the features of General Dodds, Governor Ballot and King Toffa.

The walls of the second room are lined with four large corner display cases in which one can see, on the left as one enters, plant products from Dahomey, starting with the palm tree, the colony's main source of wealth, and its various products, followed by groundnuts, copra, kola, shea nuts, etc.

The showcase on the right contains some very interesting items; a complete ceremonial costume, in gold embroidered velvet, taken from the wardrobe of King Toffa, as well as the crown surmounted by a lion, the tiara and the boots bearing the king's arms.

In the same showcase, rich gold and silver fetishes belonging to King Ago-li-Agbo, the tunic of the generalissimo of the Amazons with silver epaulettes in the shape of hands and pearl caps that once headed Behanzin.

In the other two display cases opposite the weapons, indigenous works of basketry, cut leather, carved wood and fruit, etc.

Leaving this room and at the same time the main building, a staircase leads the visitor to the Paillote, called the Salle des Sacrifices, because it houses the sacred table in front of which the executors of the bloodthirsty Behanzin took off the unfortunate condemned with the help of large cutters, now at rest and stuck in the ground next to this table; all around the fetish sticks pricked in the ground. On the wall is a remarkable portrait of King Toffa, wearing the great cord of the Black Star of Benin, painted in oil by A. Druard.

From the corbelled gallery, originally supported by sharks and snakes, one can see the post occupied by indigenous militiamen, and the watchtower, on the edge of two lakes separated by a waterfall and on which a few pirogues float. In the upper lake a lake hut has been built on the model of those constructed by the peoples inhabiting the coast and the river regions, whose predominant occupation is fishing; the proximity of the great forests and the wild animals also oblige them to this precaution. One descends into the garden by several curiously entangled staircases. Higher up, a point which particularly attracts the attention of the toule, the native quarter, occupied by the troop of blacks sent (with how much care!) from Dahomey, by the care of the French government. This troop is composed of eight militiamen commanded by a sergeant and a corporal, Emilio, the troop's interpreter, three jewellers, one of whom is O'bassa, named above, a hatter, a marshal, three marabout weavers, five women and two children of eight and twelve years of age, Adebella and Aïla, who very kindly receive the caresses and above all, the pennies of visitors.

On the way up, one notices an acclimatisation greenhouse with exotic plants and, in an enclosure, a chief's hut which houses the administration.

In short, anyone who has seen the Dahomey exhibition, whether curious or initiated, recognises that the colony, under the skilful guidance of its Commissioner, has been represented in a manner worthy of it.