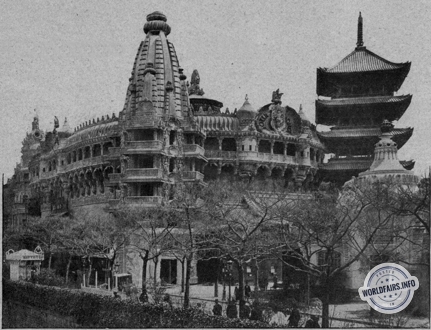 The main group of panoramas and dioramas at the Exhibition is the one that rises on the Champ-de-Mars, near the Eiffel Tower, under the name of Tour du Monde, a title that is not entirely accurate, since all the paintings grouped in this pavilion show us only Europe and Asia.

The organiser of this attraction, Mr Dumoulin, a distinguished artist attached to the Ministry of the Navy, executed the paintings used to compose the panorama on the spot, which is a sure guarantee of their accuracy; but moreover, he had the ingenious idea of bringing back from this long journey a fairly considerable number of natives from each of the countries he intended to make us visit. He thus created what he rightly called an animated panorama, that is to say, his paintings become backdrops in front of which characters are artistically grouped, not simulated in relief, but in flesh and blood. And these figures themselves are not immobile: placed on uneven planes, or in dwellings that connect the platform on which the viewer stands to the distant perspective, they move in this appropriate setting, play, dance, stroll or work according to the character of the people they personify.

The superb palace, in which this exhibition has been installed, is not the least interesting and constitutes in a way the architectural synthesis of the countries that the visitor will see pass before his eyes inside. It would not be an exaggeration to say that the accuracy of form and the luxury of detail have rarely been pushed to this point in the reproduction of Far Eastern monuments. The various parts of this palace have indeed been reconstructed by means of casts made by M. Dumoulin from the most famous buildings of India, Indo-China, China and Japan. The exterior is therefore worthy of close examination. As a whole, the building has a high wall crowned at the top by a corbelled gallery in the Hindu style, whose pilasters, consoles and friezes are decorated with sculptures and statues of gods and goddesses. Against this wall, which surrounds the entire elliptical building, are pavilions or low buildings, either at the corners or at the base, belonging to the architectural styles of the various Far Eastern countries. As an exception, the first pavilion forming the eastern corner on the Seine side is in Renaissance style and represents Europe. At the opposite corner stands the high, mitre-shaped tower of a South Indian temple, resting on a series of loggias with projecting stone canopies and framed by deities, statuettes and monsters from Hindu mythology, whose scrupulous accuracy we are pleased to acknowledge. The Indian temple is followed by a facade of carved wood soberly enhanced with gold, copied from one of the Japanese temples of Nikko and which is of great elegance. Finally comes the reproduction of a magnificent Chinese pagoda, a high scaffolding of beams lacquered with red and gold, cut at each of the six floors by the wide roofs with turned-up corners which are so characteristic of the architecture of the Celestial Empire.

Passing under the superb door of the temple of Nikko, whose Javanese orchestra, hidden in a tribune, makes the vault resound with strangely harmonious chords, a broad staircase leads us to a first room; the periphery is occupied by a diorama of the river of Saigon, with its banks lined with an uninterrupted row of straw huts on stilts, above which the elegant plumes of the coconut palms sway. Then, once the tour is over, a few steps lead us to the wide platform overlooking the luminous panorama that envelops the room with a distant horizon.

To begin the journey from the shores of Europe to Japan in a normal way, we have to look to our left over the velvet rope that awkwardly blocks our path. The country which thus presents itself to us is Spain, and also almost France, for from the terrace where a few manolas dance while serious hidalgos roll cigarettes, we see at our feet the graceful Fontarabia, with its old tower of Charles V, and, beyond the narrow cove of the Bidasoa, our French town of Hendaye looming up against the background of the pinkish hills which separate it from Biarritz.

Now we follow to the right, and we are in Greece, on the hill of Pnyx where a young Greek woman sits melancholically watching the frolicking of cute little girls; from our observatory we see the sublime landscape of the Acropolis framed by the heights of Pontele and Hymette. From there we pass into the Turkish cemetery of Stamboul, very faithfully reproduced with its upright tombs topped with a heavy stone turban, and where it seems that a few steps on the path that opens up before us will lead us to Constantinople lying limply on the shores of the Golden Horn. A corner of Syria, fleetingly glimpsed, and in front of which Levantine potters are busy shaping elegantly shaped jugs, and we enter the Suez Canal at Port Said, a white city on golden sand, where tall liners await passage. But the solitude of the desert is suddenly followed by the dark greenery of the tropics; we see Ceylon with its snake charmers, the ruins of Angkor in the middle of which Cambodian priests and nice Javanese dancers are waving. Then we are in China, in Shanghai, where in an elegant pavilion a whole Chinese family seems to be absorbed in an exciting game of checkers.

Finally, we pass into Japan, which is the end of our rapid journey; but here we must stop for a moment, for, by a piquant indiscretion, we have been placed inside a charming Japanese house. Barely separated from us by a balustrade, stands a group of graceful young women, with delicately plaited faces, heavy buns, and silk dresses crossed and held up by a voluminous belt: crouching on fine mats, some play ingenuously with cloth-wrapped jacks, while others, under the supervision of a matron, are engaged in menial work. The picture is very pretty; through the wide-open walls of the pavilion, we see the holy city of Nikko framed by gentle green hills sloping down to the sea.

Descending to the first floor, we see dioramas of Rome, Moscow, New York, Amsterdam; then from there to the ground floor where a mobile panorama takes us on a boat trip along the coast of Provence, from Marseille to La Ciotat. The illusion of movement is quite complete, but the same cannot be said of the waves, which are very imperfectly imitated and are far from having the marvellous mobility of those in the Stereorama that we described in connection with the exhibition in Algeria and which is a real marvel of mechanism.