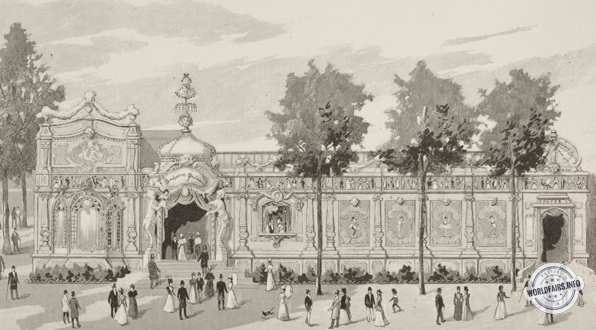 "A universal exhibition must be smiling, it must please women", repeated M. Alphand, an expert in the matter. Joy and smiles are rarely to be found in the pompous palaces where industry is preparing to display its miracles, and without in any way denying the instructive and highly interesting shows that are being planned for us, we have the right to be concerned if gaiety and fantasy have been called upon to mix the pleasant with the useful, as was expressed in Latin, a good while ago, by a poet who, for that reason, had not foreseen universal exhibitions.

M. A. Picard, a worthy emulator of M. Alphand on this point, recognised the imperative need to enliven the future Exhibition, to brighten it up as much as possible, while ensuring that good morals were not in any way offended; so we have reserved for what are called individual initiative projects, prominent places where the visitors of 1900, when they have had enough of the marvels presented to their admiration by the Exhibition proper, will be able to relax their minds in the more fanciful spectacles. The commission, charged with examining and classifying the projects due to private initiative, rejected all those which did not present any originality. It was useless to clutter up the ground, which was already so limited, with establishments that could be found on every street corner. We demanded something new and unexpected, and, with the inexhaustible imagination of the researchers, the attractions next to the Exhibition will not constitute the least charm of this enterprise.

Among these attractions, the future theatre of Guillaume figures will not be the least important. Everyone knows what a charming draughtsman Albert Guillaume is; he has a sense of humour, irony, and acute finesse, and disdains that brutal magnification which is called the charge; he has set himself up as an admirably informed portraitist of a corner of our modern world, and it is above all in the numerous family of snobs that he seeks his models.

The natural thought came to him to animate the myriads of good men that his pencil has been evoking for so long, and to make them spout the witty legends with which he underlines their deeds and gestures. A theatre then, with its actors and actresses? yes, a theatre, but with a reduced stage and tiny characters. Puppets? Puppets, very well, and why not?

An author, who was a scholar of the first order, and of the Institute, to boot, M. Ch. Magnin, did not disdain to write a "History of the Puppets"; in the preliminary epistle of this volume, he placed this sentence: "What does it matter how small the frame is, if, between this frame of six square feet, on the floor of this dwarf theatre, as much and perhaps more wit, mischief and frank comedy is spent, year in, year out, than behind the ramp of many theatres with vast enclosures and gigantic pretensions? If the theatre of the Bonshommes Guillaume needed an epigraph, it could not choose a better one.

Let us observe that there are puppets and puppets; puppets and pupazzi. The puppets are animated by a series of strings, which are directed from a higher level; the pupazzi are classical Guignol characters; everyone knows the manoeuvre of their play; three are enough to give them life. The index finger is placed in the hollow head of the doll; the thumb and the middle finger occupy each of the arms, and the difference in the length of the fingers, the angle formed by the indicator which is tilted backwards, results in that comical, irresistibly funny look which the smallest pupazzi gives off.

Mr Guillaume's bonshommes are neither puppets nor pupazzi, but a skilful combination of the two principles. Let us first enter the theatre, which will be erected on the Cours-la-Reine, in that place where, under the name of Rue de Paris, one must gather the characteristic fantasies imprinted to the highest degree with this extract of Parisian, of which Roqueplan spoke.

The façade is of a well modernised Louis XV, with its annoying caryatids, and its masks in good humour, which, at night, will light up with silvery transparencies, because they are modelled in glass paste. A frieze painted by Albert Guillaume runs the length of the façade; it is a foretaste of the show we are about to see. The room, particularly coquettish, as it should be, contains one hundred and sixty-eight seats; the stage frame has an opening of 3 meters, and as the characters are a little smaller than the third of nature, the theatre, on a human scale, corresponds to a theatre of the size of a Vaudeville.

The show prepared for the opening of the Exhibition has four sets. The first represents a salon of the wealthy, and the curtain rises on a ball in action, with its waltzers, and its orchestra, this one composed of gypsies. Then a part of the concert is performed, and we see a singer coming forward to the ramp, performing a large piece, with the obligatory roulades; the eyes turn, the mouth opens, the chest rises, accompanying the gestures; the singer is dressed in silk and satin, studded with diamonds.
The ladies who make up the opulent audience are dressed with similar luxury, and the brilliant horsemen who hurry around their powdered shoulders are wrapped in black or coloured clothes, signed by renowned tailors. The curtain is lowered and raised almost immediately; there is no intermission, because the presentation is not long: half an hour, three quarters of an hour at the most; so the change takes barely a minute, thanks to a special installation. It should be added that these sets are not simple painted canvases; they have the projection and relief of nature.
The living room, which we have seen, is natural, with its furniture, its paintings, its chandeliers, its girandoles lit by electricity, and the landscape which follows it has its "natural" foregrounds, too: it is a country setting, with the buildings of a farm in the background, and the horizon lost in the vapours of dawn. We hear roosters crowing, then the sun comes out, and over there, on the hill, bugles sound; it is the regiment passing in the distance, reappearing in the plain, and finally appearing on stage, with its music, its staff on horseback, and its endless lines of little soldiers.

The third scene takes us back to Paris, in front of the Opéra, it is the evening of a gala performance; the President of the Republic is expected to accompany a distinguished guest. The crowd circulates, groups form, conversations are exchanged; then the town sergeants and the officers of the peace come running up in a hurry: Move along, move along! A swarm of sergeants de ville lined up in a hedge, while the picketer Montjarret appeared, followed by the presidential pram and the cars of the suite.

But let's talk a little about the material means used to produce this show. First of all, the sets: the system adopted for the changes is that of the revolving stage, inaugurated by C. Lautenschlager of Munich, and taken up again, since then, by M. Samuel, at the Variètés. A quarter of a turn, and the set is transformed.

As for the pupazzi, they are simple marvels. All the heads have been sculpted in wood to the designs of M. Guillaume; the wigs and beards have been put on by theatrical wigmakers; the hands, admirably modelled, are gloved with real gloves. The dresses and costumes are marvels of cut, and the most sumptuous fabrics have not been spared.

The leading figures are articulated with particular care; by what process? It is a secret, but, all in all, as we are dealing with puppets, it is a bit of a Polichinelle secret; so we will allow ourselves an indiscretion.
When M. Boucher gave, at the Galerie Vivienne, his puppet show, which was so successful, the puppets were moved by a series of vertical rods, corresponding to a mobile base on which the character was placed. These rods were operated by means of levers, and thus provided the vertical movements; the horizontal ones were operated by return wires, attached to the rods.

These vertical rods were concealed in the ample and ample clothing of M. Bouchor's characters, but the Guillaume men are modern; they are (the male ones at least) dressed in the narrow costume of our day; the vertical rods would have appeared, and produced the unfortunate effect of puppet wires. The only thing to do was to imprison the rods and the wires in a single hollow tube, which is all the more easily concealed because the foreground figures will only be seen at mid-body. The return wires run along the arms, provoking gestures by differential levers hidden in the shoulders; they circulate in the head and animate the eyes and mouth. For the beautiful, low-cut ladies, whose breasts we see rising and falling with their breathing, it is a simple rubber bellows. Wires and rods are operated by a series of metal keys, placed at the bottom of the hollow rod, which slide into grooves. The characters in the background are simpler mechanisms; those in the last plan are painted mechanised silhouettes, which will allow, in this tiny space, to give the illusion of a staging such as no fairy or opera theatre has ever shown.