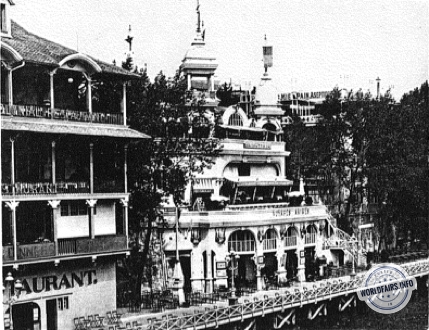 Among the projects selected by the Exhibition's general commissioner was an attraction entitled Les voyages animés.

This attraction, located within the Exhibition grounds, at the foot of the Trocadero, on the banks of the Seine, to the left of the Pont d'Iéna, comprises a charming little theatre built on a small space of 240 metres. Everything is graceful in this small room, and on the stage, in still and filmed views, the most beautiful sites of France parade by.

The authors have endeavoured to prove that there is no need to go abroad to admire beautiful views, and that our country offers us the marvels that we seek in Switzerland, Italy, Spain, etc. M. Manceaux Duchemin, Director of Animated Travel, first secured the assistance of Messrs. Lumière, of Lyon, who were responsible for all the cinematographic views, of M. Lévy, for the colour projections, and of M. Gaumont, for the chromophotography. He decided with them on the composition of seven shows, corresponding to the days of the week: Savoy, Dauphiné, Champagne and Vosges, the Pyrenees, Provence and the Côte d'Azur, Auvergne and Limousin, and Brittany.

However perfect these views may be, their parade before the eyes of the audience would have been a little monotonous, if the management had not entrusted M. Bertol-Graivil with the task of presenting them to the spectators, in verse and in rhythmic prose, verse and prose on which the master Francis Thomé embroidered one of his most exquisite scores.

We attended several performances. The colourful views, deliciously tinted, of the lakes of Bourget and Annecy, of Mont Blanc, of the Mer de Glace at Chamonix, of the Grande Chartreuse, of Vizille, etc., were delightfully charming. Champagne and the Vosges inevitably give us Joan of Arc, Domrémy and Vaucouleurs, and it is Belfort, with its bronze lion "turning grey under the snow". The Auvergne offers us its picturesque dances; the Pyrenees, the religious ceremonies of Lourdes; Brittany its beaches; Provence its poetry. And finally, the Côte d'Azur.

Here everything is pleasure and joy.
All is bright and all is blazing, Under the burning rays of an eternal sun.
Here everything breathes life,
Everything charms and delights you. Enchanted dreams are the sweetest awakening.
In your dreams nothing is a mirage;
The lapping of the shore brings you the songs of joyful sailors.
Nice is the triumphant city,
City whose intoxicating life, Throws happiness into your heart and eyes.

We have said that M. Francis Thomé had embroidered exquisite music on the text. We must add that the verses and prose of M. Bertol-Graivil are deliciously told by Mlle Varly, and wonderfully sung by Mmes Alberti and Nougier.