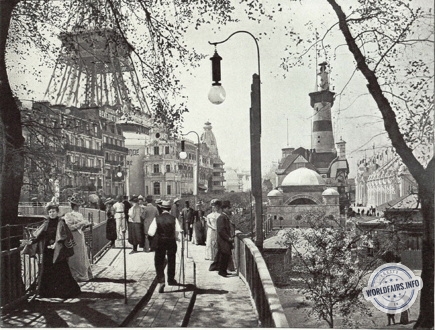 Let us now see how the moving walkway is arranged and how it works, or rather, since the installation has two platforms moving at different speeds, the two parallel moving walkways.

This invention is based on the same idea as the moving staircases, which are well known and of which a certain number have been installed in several of the Exhibition halls: it is a sort of articulated floor which moves in a regular and continuous movement, and on which people who want to take advantage of it to be carried along in its movement, must climb without the system stopping or slowing down. This is enough to say that it cannot move very fast, otherwise it would be necessary to ask each traveller to be an expert in gymnastics.

Essentially, we can imagine the mobile pavement as being formed by a series of wagons running on a track embedded in the ground or between two fixed platforms, and carrying a floor that continues without interruption from one wagon to the next; this floor is formed by parts that fit together and articulate one inside the other, so that it does not present any solution of continuity, and yet it can easily pass through all the curves presented by the track on which the wagons that support it run. This continuous train, for it is indeed a train, moves at such a slow pace that nothing is easier than to jump, or rather to simply move one's foot from the firm ground or the fixed platform onto the moving floor; it is as easy as getting on a tramway that moves very slowly, and moreover fixed rods have been placed on the edge of the pavement to enable those who are afraid to board to hold on. The descent is made in the same way and without difficulty.

Let us say straight away that, as a platform of this kind can only transport its passengers with a wise slowness, precisely to avoid untoward incidents, a second very ingenious combination has been devised, which makes it possible to double the speed of translation for those in a hurry. For this purpose, a second moving floor is installed parallel to the first, and touching it, arranged in exactly the same way, but with a much higher speed of travel: if the first has a speed of 4 kilometres per hour, for example, the second will move at a rate of 8 kilometres, and we are not giving these figures randomly, because they correspond exactly to what was done for the double moving pavement at the Exhibition.

A very simple reasoning, which is only the result of a childish arithmetic operation, will make us understand that, for the traveller already on the pavement who is sliding at 4 kilometres an hour, the second one seems to walk only at 4 kilometres as well, the difference in speed between the two being effectively only 4 kilometres. Therefore, when you are on the first pavement, it is no more difficult to get onto the second than it was earlier to get from the ground or the boarding platform onto the first moving platform.

In the space of a few moments, you perform this double operation, and you find yourself mounted in a real train, equipped if necessary with seats where you can rest, which carries you along at a speed of 8 kilometres an hour, without ever stopping or wasting time.

This is the essence of the layout of the moving walkway at the Exhibition, and also of those previously installed at the Chicago and Berlin Exhibitions; for the moving platform in Paris is not entirely new. However, those of Chicago and Berlin had only a very small development, and were rather curiosities than practical means of transport. The moving pavement of 1900, on the other hand, is of considerable length: it follows exactly the same route as the electric railway.

On this entire route, the pavements (since there are two of them) are established on a viaduct similar to the one that carries the electric railway over part of its length; but here the viaduct is continuous and is constantly maintained at a height of 7 metres above ground level. Besides the two mobile pavements, it also supports a fixed pavement which allows the passengers of the two moving platforms to stop, if they see fit, and to descend onto this immobile floor, in order to enjoy the spectacle before their eyes. This fixed pavement continues all along the viaduct, and consequently also at the places where the stations are set up, because it was necessary to have boarding stations for this means of transport perched on top of a viaduct and where everyone has to pay his place: at these points, the fixed pavement plays the necessary role of a boarding platform.

The driving force behind the movement of the platforms is electricity, as it should be. It is generated in the factory that the Compagnie des chemins de fer de l'Ouest has established at Moulineaux for the propulsion of its trains on the Invalides line; the alternating current produced there is converted into direct current for the use of the platform, in an installation made by the Westinghouse Company on the Quai d'Orsay, opposite the pavilion at Le Creusot. The electricity is distributed to the motors by means of nine cables and a device which allows the pavements to be moved in either direction.

As for the services that this means of locomotion is likely to render, it will suffice, in order to appreciate them, to say that, during the duration of the fastest turn of the pavement, that is to say in 26 minutes, one can transport at least 50,000, and even 60,000 people!