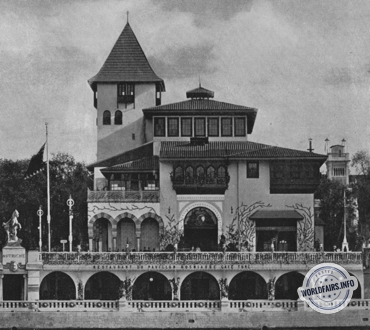 In this vast pavilion, which was dedicated to the eastern provinces of the Monarchy, Bosnia and Herzegovina, everything reminded us that we were in a country that was once still in the hands of the Turks and of which part of the population is still Muslim. That is why the architect took one of the old stately residences from the time of Ottoman rule as his type. A high, massive tower dominated the roof of the building, which was intersected by galleries and terraces. These were like the observation posts of a keep that was once part of all the manor houses in Bosnia, when it was in constant struggle against the Turk and his plundering soldiers. This kind of fortification, with its upper posts, made it possible to inspect the surroundings and observe the enemy's movements. But once tranquillity was achieved, the needs were modernised. The walls of these fortresses were pierced with large openings. The other part of the building was of a completely different style. It consisted of a rusticated main building with external galleries formed by arches supporting pink marble colonnades. The facades were decorated with wonderfully carved wooden applications or brightly coloured mosaics, against which the green tones of perennials that climbed to the balconies protruding from the upper floors stood out.
In the interior of this palace, not only were all the products of the two provinces of Bosnia and Herzegovina brought together, but also everything that could give the public an insight into the history and customs of their inhabitants. Thus, on entering under the vestibule, there was, on the right, a very faithful reproduction of the haremlik or family flat of a rich Bosnian Muslim, animated by characters dressed in picturesque costumes, while on the opposite side we were presented with a salon arranged according to modern taste, but with furniture and hangings made in the country.
In the large hall where we then entered, the interesting products of the decorative art schools of the two provinces were grouped under glass cabinets: inlaid metals, engraved copper vases, stamped leathers, etc. The back of this vast and luxuriously decorated room was filled with an immense diorama of the city of Seraevo, with its crowded market place, its narrow streets and the perspective of its houses and mosques rising up the sides of a picturesque hill. In front of this diorama, one could see native workers executing those beautiful embroideries so famous in the East, and in other parts of the pavilion were installed workshops where goldsmiths, chiselers, and boilermakers, dressed in elegant costumes, worked under the eyes of the public. A room to the right of the central hall contained a superb archaeological collection of weapons, jewellery and fabrics of incomparable wealth. Mannequins dressed in the rich costumes of the indigenous women were displayed here and there.
The technical part of this exhibition was completed by the galleries on the first floor where, next to samples of the products of this rich territory, grains, wines, tobaccos, honeys, etc., there were sections on public works and primary education, accompanied by reproductions of mosques, schools and public buildings.