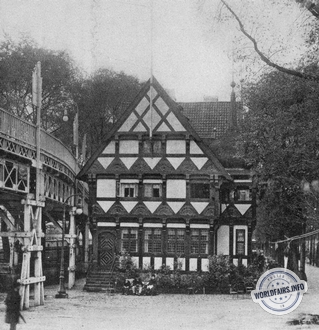 The Danish pavilion stood behind the palaces of Turkey and the United States and separated from them by the picturesque Rue des Nations.
While all the powers were vigorously vying for the thin strip of land on the edge of the Quai d'Orsay reserved by the Exhibition Commission for foreign nations, and where such a picturesque row of palaces stood, Denmark alone had neglected to claim its place. This abstention seemed regrettable to some Danish patriots who rightly felt that their national architecture deserved to be included in this collection, which was one of the main curiosities of the Exhibition. A public subscription, opened in all the cities of the kingdom, raised the funds necessary for the construction of the pavilion which stood near the door of the Invalides bridge, at the foot of the famous moving walkway.
This pavilion, in spite of its unfavourable situation, deserves to be noticed by visitors, for in its limited proportions it was of a charming artistic taste and could have been used as a model for a small country villa or sea-bath.
It was a faithful reproduction of a Jutlandish house in the pretty little town of Horsens. The building, built entirely of fir, had a sharp gabled façade with exposed timbers, between which opened rows of small-paned windows surmounted by triangular ornaments, largely chiselled in the wood and of the happiest effect. At one of the corners of the house, a small wooden dome, of very curious form, surmounted the vestibule, on the door of which was engraved inscriptions in the Danish language; the elegant copper fittings of the door of this vestibule and the other openings were to be noticed. The whole exterior was very original.
The interior of the pavilion had no exhibition as such. It simply showed the visitor the interior layout of a Danish villa.
To the left of the entrance hall was a charming reading room; to the right, preceding the ladies' room, was a large reception room to which the vault of the pavilion itself served as a ceiling. From this spacious room, a sort of atrium, one could see the upper galleries which served the rooms on the first floor and a vast covered terrace which occupied one of the corners of the building.
Light was distributed inside by an uninterrupted series of small stained glass windows, half of which were covered by a narrow strip of printed muslin. The furnishings of the rooms, which were made of pitch pine, oak and mahogany, were appropriate to their purpose. Their artistic decoration was worthy of attention. There were a number of paintings by the best Danish artists and superb samples of porcelain from the royal factory in Copenhagen. In the reception room, there was also an equestrian statue of King Christian IX carved from a solid block of silver and standing on a pedestal with the motto: "With God, for honour and right".
This pavilion was a credit to its organisers and its interior design was much appreciated by lovers of simple and slightly archaic furnishings.